Qatar is Bailing Out Jared Kushner and No One Cares 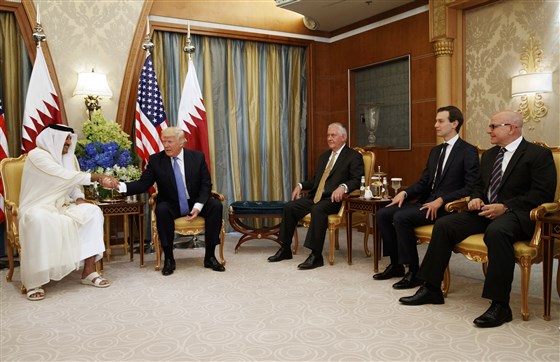 If this was the only scandal rocking the Trump regime right now, it would be huge. Devastating! Presidency ending! But it's just another Thursday because this is our life now:

The real estate company owned by White House advisor Jared Kushner’s family is close to “receiving a bailout” for their troubled 666 Fifth Avenue tower in New York City from a company with ties to the Qatari government, according to The New York Times. Jared’s father, Charles Kushner, is reportedly in “advanced talks” with Brookfield Properties—a Canadian company whose second-largest shareholder is the Qatar Investment Authority—over “a partnership to take control” of the property. The Kushners bought the building 11 years ago for $1.8 billion, a record in New York City, but it now only generates “about half its annual mortgage payment.” Although Jared Kushner has divested from the family business, his work in the White House focuses on the Middle East, and he reportedly lost his high-level security clearance because of concerns that another nation could “gain influence with the White House by doing business with the Kushner Companies.”

It is breathtaking how venal and corrupt these people are, in broad daylight, and no one is doing anything about it! There's no way Jared Kushner should be going anywhere without Federal marshals on each elbow. We have porn stars, collusion with Russia, illegal emoluments flowing into the President's bank accounts, obstruction of justice, a (different!) son-in-law turning on Paul Manafort, criminal conspiracies everywhere you look, Ryan Zinke and Scott Pruitt, Ben Carson and a quid pro quo with the Chinese government all brewing--and now we see how Qatar is going to shake loose some case and save the Kushners from financial oblivion.

Clearly, Special Counsel Robert Mueller does not scare the Qatari emir enough to make him sit down for a chat about the questionable ethics of the president's son-in-law.

It's the most corrupt fucking "administration" in the history of this country. Forget Teapot Dome and Ulysses Grant's friends raking in the bucks. In the Trump era, if you're not shoving cash into your pants as fast as you can take it off the bribe table, you're going to go home alone, sucker.