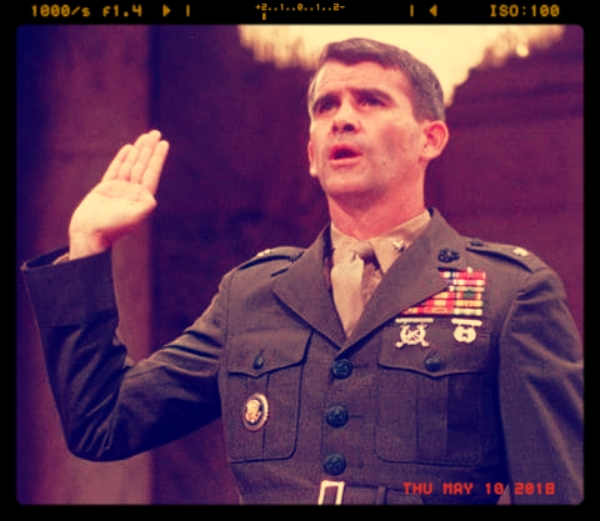 Oliver North is like a bad sitcom that won't go away.

With his blue-steel gaze and steel-gray hair, Lt. Col. Oliver North looked like a movie star against the stale browns and beiges of C-SPAN. His cowlick and gaptoothed grin, though, reminded you of an old neighbor or college roommate. And his voice was mesmerizing when first deployed on the American public during the epic Iran-contra hearings of 1987 — lowering to a reverential hush, or hiccuping with emotion, as if he were drunk on patriotism.

He was a riveting presence and an immediately polarizing one — hailed by some as an American hero, reviled by others as a subversive Deep State troublemaker for his role overseeing the illegal sale of arms to Iran and funneling the proceeds to rebels fighting the Nicaraguan government. Ollie North seemed destined to play a major role in our culture and politics.

Instead, he was ensnared in years of legal trouble, then lost a pricey U.S. Senate race — and all that potential seemed to evaporate. But here he is now, at 74, with a shot at a third act, another charge at the front lines of the culture wars as the new president of the National Rifle Association. And once again, everyone has opinions about him.

Nobody this corrupt has ever survived as many failures in American public life as Oliver North. He was relegated to crank status on Fox News, barely holding down a job, and then the NRA decided to revive another old traitor to American values. They went trolling back to the Eighties and installed him in an office in their Northern Virginia headquarters. I'm waiting for them to bring back Alf and the fucking New Kids on the Block.

The NRA doesn't believe in American values--it believes in using money from suckers to further the interests of gun manufacturers over every aspect of common sense and public safety. They do this by using fear, and that's what helped elect Trump. Irrational, misguided fear and good old fashioned racism and bigotry. It's a perfect fit for North. He gets to sit with the treasonous bastards who can't stop taking Russian money and go on TV so he can pretend to understand American values. Can't wait to see the new fence they put around Ollie's house.