Jeff Flake Has No Spine 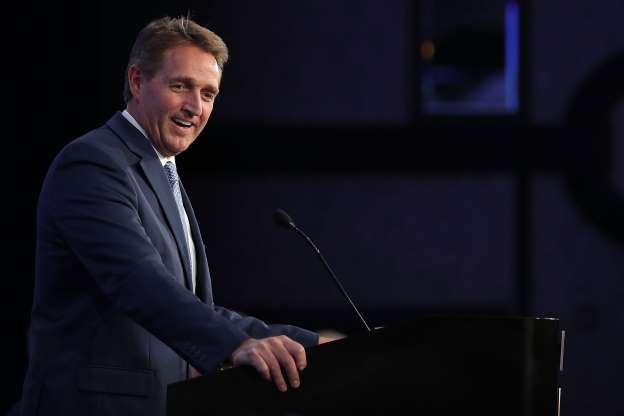 This is self-serving nonsense that is calculated to help Jeff Flake revive his political career after this whole Trump thing crashes and burns:

In an address to Harvard Law School graduates on Wednesday, Arizona Sen. Jeff Flake sharpened his critique of President Trump and Congress, which he said “is failing its constitutional obligations to counteract the power of the president, and in so doing is dishonoring itself, at a critical moment in the life of our nation.”

Flake, a Republican who is not seeking reelection, has long been a vocal critic of Trump.

“Our presidency has been debased by a figure who has a seemingly bottomless appetite for destruction and division and only a passing familiarity with how the Constitution works,” Flake said Wednesday.

“You might reasonably ask, where is the good news in that? Well, simply put: We may have hit bottom,” he continued. “Oh, and that’s also the bad news. In a rare convergence, the good news and bad news are the same — our leadership is not good, but it probably can’t get much worse.”

Flake could do one of two things:

1. Switch parties and caucus with the Democrats

2. Vote against the Trump agenda every time it comes up in the Senate

Here's why he won't do either of those things--Flake is afraid of alienating the "go along to get along" Republicans who are uneasy about supporting Trump but wouldn't vote for a Democrat to save their lives or their jobs. When Trumpism is crushed this fall, and, once and for all in 2020, the door will be open to any Republican who appears to have anti-Trump credibility. That's all Flake is doing right now--sending up a flag to people who can see that he is somehow "against" Trump while not actually doing anything that would benefit Democrats, the country, or an anti-Trump agenda.

In short, he's just some asshole.