An Administration of Monsters and Thugs 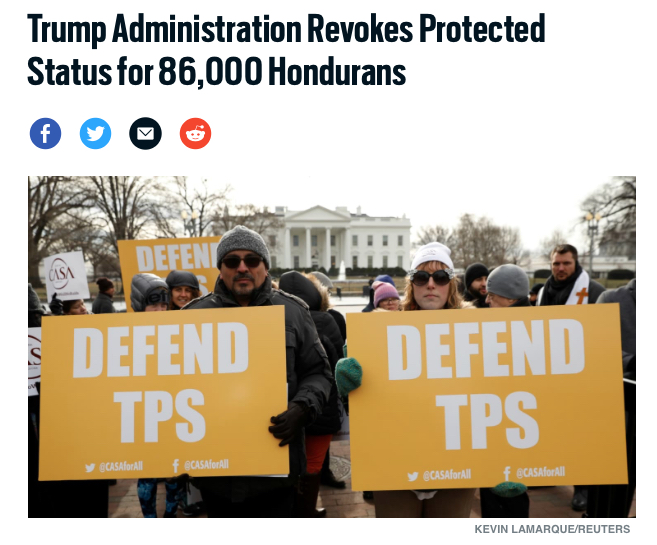 If there's a decent, humanitarian thing that needs to be done, you can count on Trump and his band of thugs to do exactly the opposite and send people to their deaths:

The Trump Administration is ending temporary protected status for 86,000 Hondurans who have been living in the U.S. since Hurricane Mitch hit in 1998, according to CNN. The move brings the number of people who have had their temporary status taken away by the Trump administration to more than 425,000 in the last year. Most of those affected by the decision have been living in the U.S. for about two decades, and will “either leave the country or make other arrangements to stay, if they can qualify for a visa some other way,” CNN reported.

There's no reason to do this. Stephen Miller has the president's ear, and when he whispers about being tough and strong and making the base happy, this is what emerges from the puke funnel.

A number of these people will die at the hands of criminals in Honduras. Trump and his minions don't care. Many of these people are wonderful members of American society. Trump and his shitbag army couldn't be bothered to lift a finger to help them. None of this needs to happen at all and it is a mindless, senseless abuse of power. Trump and those fucks backing him in Congress need to be swept from office, once and for all.

And on and on. The list is endless, and Democrats can run on these things and beat them. They had better.