Trump is Too Evil to Plant a Tree 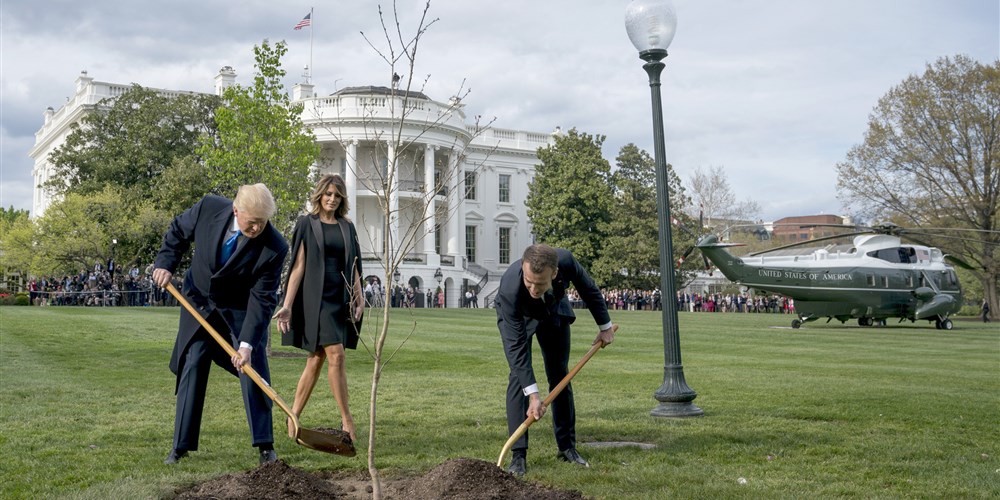 How evil do you have to be to make a tree disappear?

A tree gifted to President Donald Trump by French President Emmanuel Macron has disappeared from the White House lawn.

The pair planted the sapling, taken from the site of a World War One battle in north-east France, last week.

Mr Macron said the tree would be a reminder of "these ties that bind us".

But a Reuters photographer on Saturday took a shot of only a yellow patch of grass where the tree once stood. The French ambassador to the US later tweeted the sapling was in quarantine.

So they had a symbolic planting, tore the tree out of the Earth, replaced it with grass, and claimed that is is now in quarantine? Really? How does anyone do such a thing? Why go through the motions of "simulating" the planting of a tree with historic and cultural connotations and then have it end up being taken out of the ground like this?

You're going to tell me Trump even knows what Belleau Wood was and what it means? You're going to tell me that a president who has put people in positions of responsibility with an agenda of destroying our environment and lying about climate change is qualified to even plant a tree, symbolically or otherwise?

Get out of here with that bullshit.

Are we supposed to believe that Trump didn't cackle like some sinister Bond villain and have the tree burned in order to stick it to the little man from France? At this point, it would be hard to believe that anything decent was done to ensure that this tree could have anything resembling an existence on this planet. There's more than enough wood there to make a stake that can be driven straight through the living heart of something else liberals love.

Fuck these people. Everything that comes into the orbit of Trump is either destroyed or quarantined and then abandoned, broken and lost. And, yes--it's just a tree! But it is a symbol of the whole rotten mess, top to bottom.