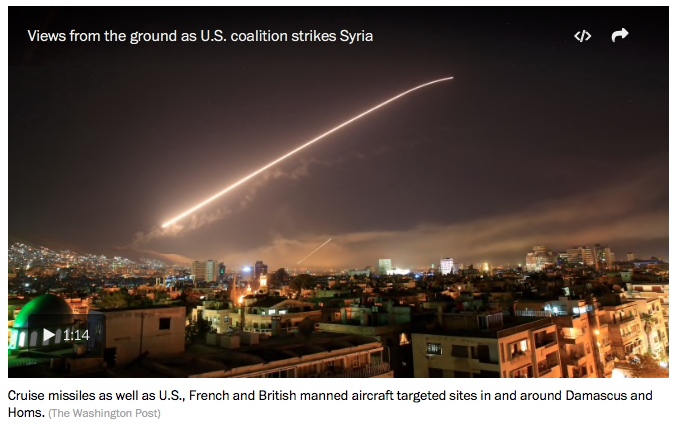 Last night, Trump stepped up to a podium and announced we were attacking Syria. He sniffed through that coke-blasted nose of his, and pretended like this was a big deal.

Syria, Russia and Iran shrugged off strikes on Saturday by the United States and its allies against three Syrian chemical weapons facilities, which drew angry condemnations but no indication that there would be a wider escalation.

But the pre-dawn volleys of cruise missiles launched by the United States, Britain and France were limited to three sites linked to Syria’s chemical weapons program and triggered no retaliation. Russia said they did little damage and that most of the cruise missiles targeting Syrian sites had been intercepted by Syrian air defenses, including all of those that were bound for the site from which last week’s alleged chemical attack originated.

Everything the Russians and Syrians say is a lie, of course. But if we were going to do any real damage to the Assad regime, we would have lit up Damascus days ago without sending a "warning tweet." We would have attacked numerous sites where the military has been staging itself and we would have hit actual military targets as well as the regime's offices and bunkers. This half-assed attempt to save face after tweeting out a warning earlier this week amounts to one of the most ineffective attempts at asserting international disgust ever. It was ridiculous to assume that Trump actually cared about anything other than not pissing off the Russians.

I'll let you in on a secret. When Trump tweeted out that "missiles" were going to be fired at Syria, he gave aid and comfort to the enemy and allowed them to move equipment around. That's how pathetic he really is. And when he said "Mission Accomplished" when all was said and done, he turned this into a huge farce.