The Master of Hate 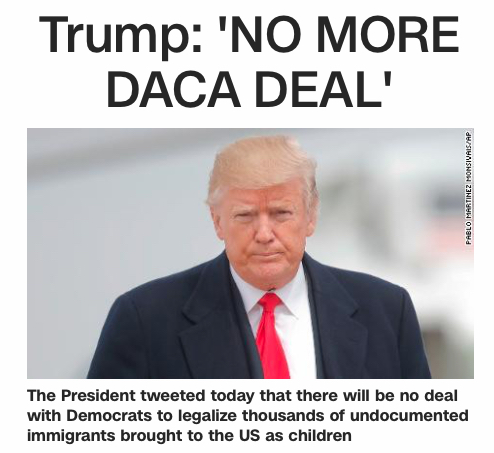 Trump is mastering his ability to use hate to punish Americans who oppose his reign of terror:

President Donald Trump again called for an end to the filibuster and said there will be no deal with Democrats on the Deferred Action for Childhood Arrivals, also known as DACA.

In two more tweets Sunday morning, Trump threatened to dismantle the North American Free Trade Agreement (NAFTA), which he called Mexico's "cash cow," if the country doesn't reduce the flow of immigrants coming across the southern US border. Trump also tweeted that "big flows of people are all trying to take advantage of DACA. They want in on the act!"

Well, you probably aren't surprised or shocked to see the President of the United States of America rip into innocent people on an Easter Sunday. Trump's advisors are using a hatred of Latino people to motivate him; they are also attacking the economic life of this country. The southern border is used to move goods back and forth, and, along with that, the people who do the jobs no one else wants to do. Every time this Republican president attacks the so-called "illegal immigration" issue, he uses hatred and fear to advance his agenda. The media needs to do a better job explaining this. It's not about crime. It's about energizing the absolute worst impulses in people to rant and rave about things they don't understand.

The only way Trump and his minions in the Ministry of Hate can justify tearing up NAFTA and fighting the movement of people across the border is by motivating enough Americans to start hating Democrats. They have to criminalize sympathy. They have to make it a toxic environment where there is no nuance. When you talk openly of a child brought here as an infant, and raised in this country, and then given a path to citizenship, you have to respect the nuances of our laws. When you refuse to do so, the language of dehumanization takes over. Trump and his regime have stripped hundreds of thousands of people of every shred of their humanity. Once their hate is whipped into a frenzy, they'll vote for any Republican, and especially for a Nazi or a racist or a corrupt fool like Trump.

None of this makes any economic sense. None of this will solve a single major issue in our country. None of this will make a goddamned bit of difference when it comes to improving our infrastructure, bringing jobs to areas where industries have shut down, or fixing our health care system. This is the distraction that whips up more rage and fear, and that's what will save a number of GOP members of Congress this fall.

There was never going to be a deal on DACA. Trump has used the issue to create more chaos and more pain. He reached out and pushed the hate button on, again, an Easter Sunday which is widely celebrated in much of the community directly affected by DACA. I look forward to the day when this is not the sort of thing anyone has to write or think about anymore. We have a long road ahead of us, and Trump is ramming his tiny fist into the middle of that hate button every chance he gets.

Mr. Mueller, would you please hurry?