Stop the Militarization of the Police 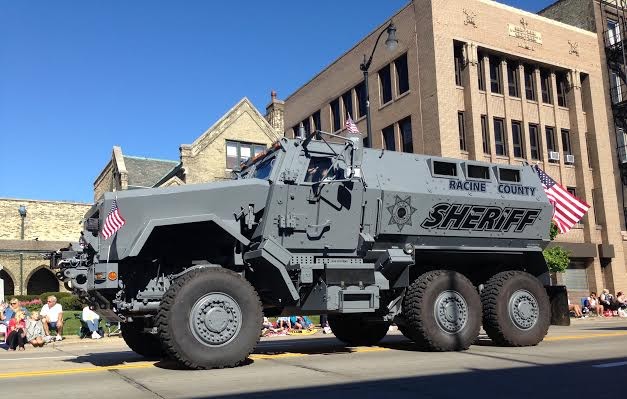 No, it does not. The Trump Regime would love to turn everybody's local police force into something far more militarized than it needs to be, but the cops are saying no to this because common sense is starting to kick in:

The amount of surplus military equipment sent to local police departments across the nation has sharply declined in recent months despite an executive order President Trump signed that was intended to increase those transfers, a USA TODAY analysis has found.

Shipments of military gear in the first three months of 2018 fell by half compared with the same period last year, Department of Defense data show. The amount of armored vehicles, high-caliber rifles and other equipment measured by dollar value also slid.

President Trump’s executive order, signed last August, rescinded limits imposed on the program by the Obama administration after the battlefield-style response to the Ferguson, Mo., riots in 2014 caused an uproar. Some police officials said they are approaching the program cautiously despite robust support from Trump.

“If you have a long rifle or you have a military vehicle, it looks bad,” said Sgt. Stephen Wells, a spokesman for the Kern County Sheriff’s Office in California, which ordered about 90 military items from the Pentagon in 2015 but only one last year. “We’re not an occupying force.”

Transferring military equipment to police officers is, in and of itself, a terrible idea unless we're talking about body armor and footwear. Making the police look like an "occupying force" that is dressed up like a brigade deployed to the outskirts of Baghdad does not serve or protect anyone. If anything, making the police look like the military only intimidates the population and leads people to resent the presence of local law enforcement.

The good thing here is that there are police departments out there who are seeing the impact of how they present themselves to the public. I never thought this was a good idea, and I'm glad others are catching on to how little this does to keep people safe.

Now, I will grant you that an MRAP is probably the only way you can safely expect to break up a rowdy cribbage tournament:

CALEDONIA — Caledonia Police responded to a complaint about a loud party using a PA system in the 4000 block of Bluffside Drive on Saturday, Aug. 18. When police arrived at about 9:30 p.m., the homeowner said they were having a cribbage tournament. Police gave him a warning and told him an amplification device permit was needed.

If the police had rolled up quietly and asked people to disperse, I'm sure they would have, given the proper chance.