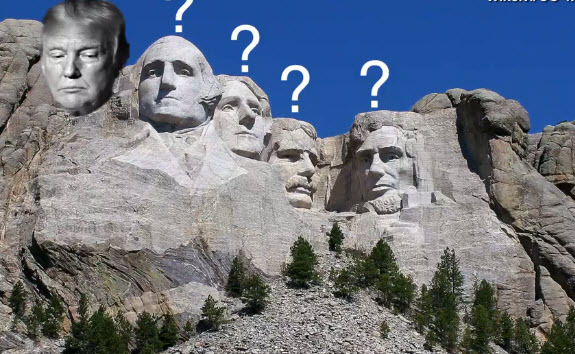 Trump wants to have his likeness carved onto Mount Rushmore. That is still not a joke:

A year before Donald Trump became president, an editorial cartoonist for the Tulsa World pictured Trump standing at the foot of Mount Rushmore, critiquing his fresh-carved likeness on the mountain alongside Abe Lincoln.

"Make me thinner and lose the other guys," the caricature of Trump says to a man in a hard hat. The cartoon served as a critique of Trump's perceived ego and sky-high ambitions.

But after President Trump was sworn in, he relayed his dream of actually being carved on the mountain, according to South Dakota Rep. Kristi Noem.

Noem said the two struck up a conversation in their first meeting at the Oval Office. (Watch in the video above.)

"He said, 'Kristi, come on over here. Shake my hand,'" Noem said. "I shook his hand, and I said, 'Mr. President, you should come to South Dakota sometime. We have Mount Rushmore.' And he goes, 'Do you know it's my dream to have my face on Mount Rushmore?'"

If there are any public monuments for Trump built after he leaves office, the security needed for these places is going to be prohibitively expensive. They can't even protect the star he bought for himself on Hollywood Boulevard. And if there ever really is a "Trump Presidential Library" I would be shocked if it didn't become a necessary stop for everyone who has opposed and resisted his terrible reign of error. It will be a pilgrimage site for everyone wronged or slighted by this horrible man. Imagine being that security guard.

This is the only public monument to Trump that needs to exist: 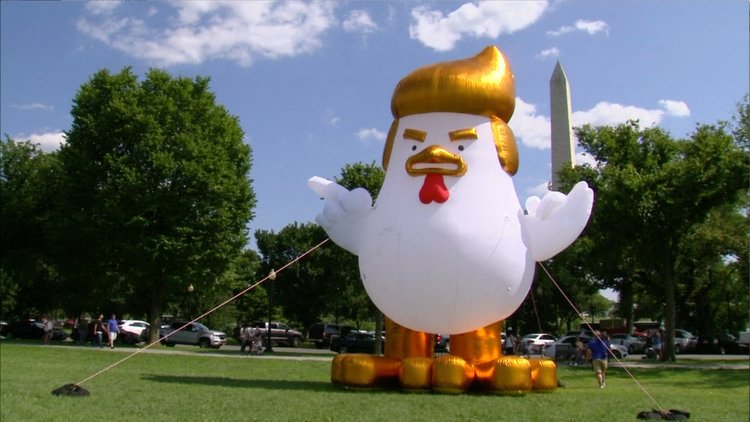 Honestly, though--a Trump Presidential Library would have to be located in Manhattan because who else would want it? I suppose there are White Nationalists in Idaho who would consider giving up some land, but would any of this be near the freeway? Yeah, you have to think about these things. Once Trump is removed from office, I suppose they could put it in Moscow but that would cut down on the foot traffic. That's why I think they'd have to use the existing Trump Tower for it, and the only people allowed in would be crime scene investigators and forensic accountants.

The next likeness that could be added to Mount Rushmore would be Reagan's, and the horror that is Trump might make that more likely in the years ahead if only to ensure that it ends any discussion of adding an Orange Shitgibbon to a somewhat sacred national park. I'm reasonably certain that trying to honor or memorialize Trump will become a fool's errand. Trump has single-handedly made it possible to view George W. Bush is a slightly less hostile light, and that's about all you can say about that.