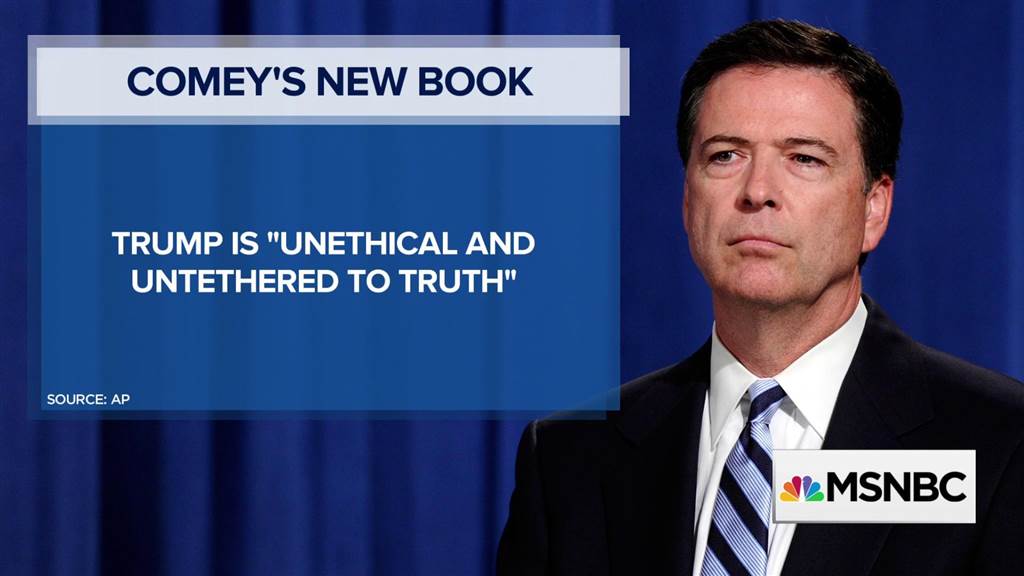 I agree with the assessments made by James Comey about Trump and his utter lack of any respect for the law. Trump is no mob boss. He is the clown who gets rolled by the mob every time. It's good to hear the truth come out. But Comey failed this country, and that's what this story should be about. He failed to do what was necessary to protect us from Russian-backed Trumpism and, by extension, so did President Obama and so did our intelligence community. Our institutions failed us, and now we have to wait for two elections to come and go before Trump is gone from our lives forever. We have been denied the decency and dignity of a Hillary Clinton presidency, and history should hold everyone who failed to make it happen accountable for this crime.

Then-President Barack Obama reassured then-FBI Director James Comey of his support after the 2016 election during a private meeting in the Oval Office, Comey writes in his upcoming book.

Comey recalls that during the meeting, in late November 2016, Obama told him, "I picked you to be FBI director because of your integrity and your ability. I want you to know that nothing -- nothing -- has happened in the last year to change my view."

CNN obtained a copy of the book and corroborated news reports about Comey's highly anticipated recounting of his time in the Trump administration.

Comey had been widely criticized for his handling of Hillary Clinton's email server investigation when he announced just before the presidential election that the FBI was reopening the probe. In the days leading up the election, he announced there were no new developments, but Clinton has said Comey's actions contributed to her loss.

Hillary was right. Comey handed the presidency to Donald Trump by failing to understand the magnitude of his corruption and his extensive relationship with Russia's oligarchy. And, in so doing, he undermined the Department of Justice and made a mockery out of the rule of law. He failed to use his position as the head of the FBI to ensure that foreign influence in our democracy would not result in the seizure of the American presidency by Vladimir Putin. This was a major dereliction of duty, and it cannot be erased with a feel good memoir that kicks Trump in the 'nads.

I may not know what Obama, Comey, Brennan, Clapper and whoever else knew in late 2016, but it's pretty clear that they knew enough to go public with an assertion that Trump was being backed by Russian intelligence. They should have blown past Mitch McConnell's objections and gone public with that in order to inform the American people as to what was happening. They should have put a foot in Paul Ryan's chest on their way to tell the country what was going on.

Look, we are living in the midst of a horrorshow. Comey helped direct this thing and he is an imperfect vessel in the fight to save our country. He should get his victory lap and then have the decency to go away. I'm not going to listen to anyone who says Hillary should quietly retire and say nothing about our country. Our industrial media complex can't stop shitting itself with glee whenever something anti-Hillary ends up in the discussion. That's foolishness of the highest order. She won the election, but Russia helped Trump steal it from her. Comey was the unwitting accomplice who held the door open and let the bankrobbers get away.