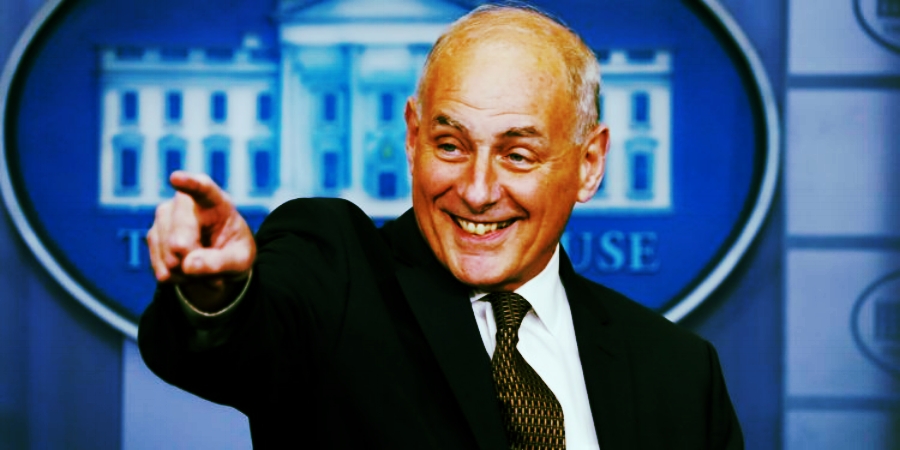 Everyone around Trump is so horrible, all you can do is laugh:

White House chief of staff John Kelly was once empowered to bring order to a turbulent West Wing. Now, it seems, he's receding from view.

Kelly's clout has been diminished. His word is less trusted by staff. His guidance is less tolerated by an increasingly go-it-alone-president.

President Donald Trump has rebelled against Kelly's restrictions. He's even mused about doing away with a chief of staff. That's led White House staffers and Trump allies to believe Kelly's working on borrowed time.

Kelly's allies say his retreat is strategic and an acknowledgment that Trump wanted to exert more control.

But those close to the president say Trump's increasingly expressed fatigue at Kelly's attempts to shackle him and that while Trump's not ready to fire Kelly, he's gradually begun freezing him out.

Who really cares about the fate of any of these people? H. R. McMaster has been thrown to the wolves. Trump is surrounded by a group of cabinet officials so corrupt and awful that any one of them would have brought down any previous administration in American history. Every one of his staffers seems to be a violent sexual deviant who cannot resist acting out in public. Even his family consists of human scum.

We are in the second year of a crime against the American idea. Trump and his regime go against everything this country was founded upon. The fact that there are people in place who are actively tolerating this shitshow and won't do anything about it proves that the rot begins in Congress and the establishment of the Republican Party. These are such profoundly bad people, and Kelly is certainly one of them. We are long past the moment where he, McMaster, and Mattis should have gone to Capitol Hill and told the leadership in the House and Senate to put the country out of its misery and begin impeachment proceedings.

There is no obligation to show sympathy for these moral cowards. They're the ones that are keeping us in this mess.