Even On His Way to Church, Trump Spews Hate 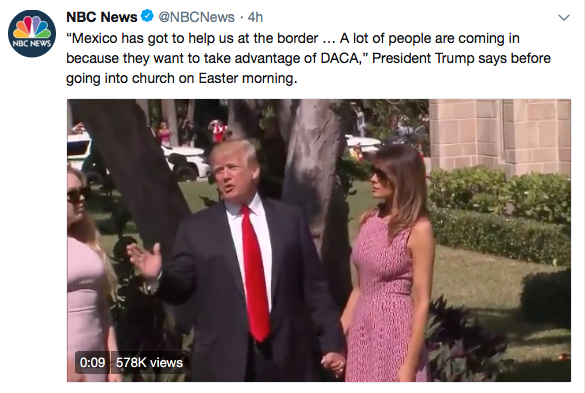 I just want to reiterate this again in a separate post--the President of the United States of America, who is married to an immigrant, is attacking people with hateful rhetoric about immigration on his way into a church on Easter Sunday.

“Mexico has got to help us at the border … A lot of people are coming in because they want to take advantage of DACA,” President Trump says before going into church on Easter morning. pic.twitter.com/WimSVUylrZ

Trump is so possessed by hatred and so desperate to lash out at his enemies that he cannot resist doing so on Easter Sunday morning just outside of a church where he will attend services. Imagine the cognitive dissonance necessary to say what Trump said today. It's mind-boggling.

This is not how decent people act, ever. This is not normal. This is really just another despicable act by a man so shallow and so absolutely gripped by his own torturous hate for others that he cannot resist any opportunity to strike out at people who are living in a legal limbo that he created in order to make his supporters happy.

Trump did this on Easter Sunday right before church? Yes, he did. Trump is who he is, and he will never change.