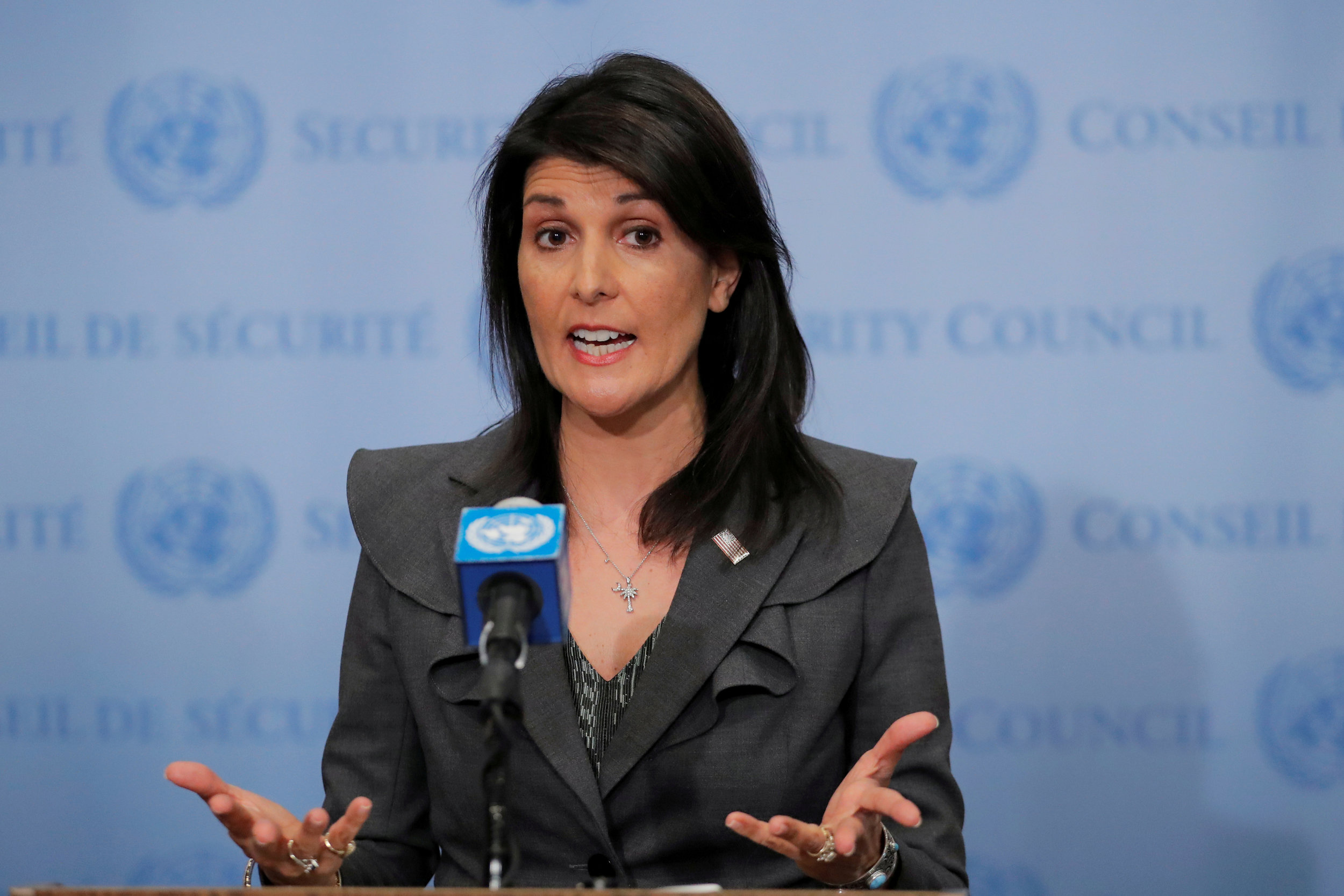 If Nikki Haley wants to have a future in politics, she should resign immediately and tell the world that the President of the United States is compromised by his relationship with Russia:

President Trump on Monday put the brakes on a preliminary plan to impose additional economic sanctions on Russia, walking back a Sunday announcement by U.S. Ambassador to the United Nations Nikki Haley that the Kremlin had swiftly denounced as “international economic raiding.”

Preparations to punish Russia anew for its support of Syrian President Bashar al-Assad’s government over an alleged chemical weapons attack in Syria caused consternation at the White House. Haley had said on CBS News’s “Face the Nation” that sanctions on Russian companies behind the equipment related to Assad’s alleged chemical weapons attack would be announced Monday by Treasury Secretary Steven Mnuchin.

But Trump conferred with his national security advisers later Sunday and told them he was upset the sanctions were being officially rolled out because he was not yet comfortable executing them, according to several people familiar with the plan.

Administration officials said the economic sanctions were under serious consideration, along with other measures that could be taken against Russia, but said Trump had not given final authorization to implement them. Administration officials said Monday it was unlikely Trump would approve any additional sanctions without another triggering event by Russia, describing the strategy as being in a holding pattern.

Trump feels this about sanctions: he is "not yet comfortable executing them." How about we call this what it really is--a euphemism for a man so totally corrupted and compromised by his Russian handlers that he is terrified of what they will let slip out about him. At this point, who cares? The Trump regime is finished. The law is going to catch up to them. I expect Trump to pardon at least a dozen people in the months ahead, but it's not going to matter.

Trump needs a "triggering event?" How many more examples of Russian "wet work" do we need? You want to get rid of Putin? Take every dime that he and his oligarchs are hiding in the West. Take every fancy house in West London. Take every apartment in New York City. Take every mansion in Florida. Take it all away from them. Putin's grasp on power exists because we have not figured out how Russia really works. If everyone around Putin was broke tomorrow, his head would be on a pike by Sunday.

Haley has to understand by now that taking any stand against Russia's murderous kleptocracy goes against every fiber of Trump's being. He cannot defend this country against an enemy dedicated to the destruction of Western democracy, and this, ultimately, is what will force a handful of Republicans to vote to impeach and remove him. Trump is the physical manifestation of the collapse of our elites in this country. We are never going to trust certain institutions again. In order to defend himself, Trump is going to burn everything down. Far too many Americans are ready to help him do just that. He is owned by the Russians in a way that would have shocked Americans just a generation ago.

Not only has Trump humiliated her but also the Vice President. Trump refused to let Jon Lerner work for both her and Pence at the same time. Lerner, a noted Never Trump supporter, is completely unqualified for his job, of course, but why should that matter to today's Republicans? Everything must burn, and everything must be destroyed before the mid-term elections arrive.

We do have a stark choice. We can take American back from the goddamned Russians, but people have to understand one thing. Trump is not going to let go of power. He's going to hold on to it as long as possible. What would help wrest it away from him is if his enablers, like Nikki Haley, would wake up and realize that they cannot serve Trump because Trump only serves his Russian masters.