Under the Sway of Mr. Putin 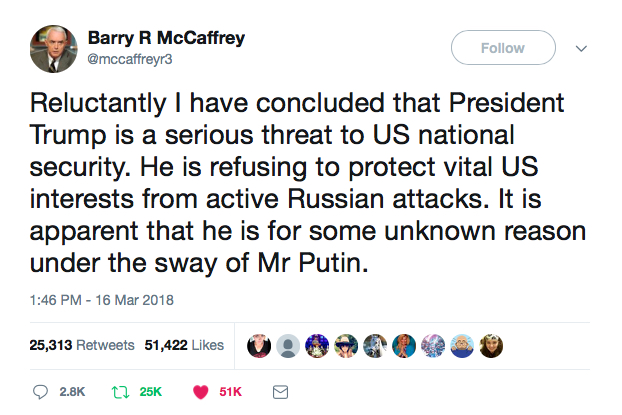 I saw this on my Twitter feed, and it sort of blew my mind. Years ago, I met General McCaffrey and this was during the Iraq war. He is very approachable and gives off the sense that he knows he is a real leader. Back then, he worked in an office building south of the Pentagon, and knew that this world required him to be a public figure and a political one at that. He was a regular guest on television, and as a retired general, he brought his standing in the world to the table. Yes, he led a division in the first Iraq war that went through the soft army of Saddam Hussein like a razor blade through butter. His men killed untold thousands, and that made him a target of criticism from people on the left. That did not make him wrong about anything.

If I am remembering all of this correctly, his analysis and commentary was sometimes critical of the Bush Administration and sometimes it was resolutely moderate and infuriatingly middle-of-the-road on whether we should be in Iraq in the first place. There was a hard realism in what he offered as his opinion. He paid a personal and professional price for the criticisms and was not on television as much as he probably would have been had he defended Bush's incompetent and poorly planned prosecution of the war.

McCaffrey is the establishment in this country. He is part of the national security and defense community and he is well respected. For him to say that the President of the United States of America is "for some unknown reason under the sway of Mr. Putin" has to be a profoundly difficult thing for him to say in a public forum like Twitter. McCaffrey knows that his every statement is heard and recorded and watched, even at this stage of his life. He is one of the old guard, and he has the credibility to back it up.

It is absolutely shocking to hear this from a person like him. To hear this from someone who knows it would be better to say nothing at all in public is to realize that there are people willing to speak out and suffer the wrath of the pro-Trump mob. Good for the general. More need to speak out. Trump readily hides behind anyone in uniform who will lend their reputation and credibility to his insane, chaotic rule. Contrast this with the absent soul of an H.R. McMaster and you can see the clarity in all of this. If you know what the truth of Trumpism means to our democracy, you cannot serve him and you cannot perpetrate any more of this bullshit.

What's clear to me is that McCaffrey has seen or heard something that has convinced him to speak up. I think he is laying down a blueprint for how to talk about Trump. I think he is correct, and that his analysis is right. The president is under the sway of an ex-communist thug, which is all Putin really is. All of those years of public service, and this is where McCaffrey is at. When they pinned yellow bars on this man, we were in the middle of the Cold War. To discover that he's ready to throw in the towel and walk away from any chance of being welcome in this Pentagon right now is to see some badly needed public courage.

How does anyone serving Trump not recognize what McCaffrey is saying to be the truth? How do all of those in senior positions in our military feel when they see someone like this speaking out in such stark terms?

There's no understating what this means. This is the lowest point in our nation's history.