The State of Jefferson 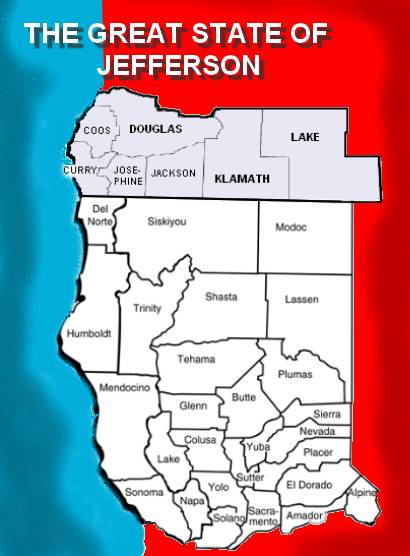 This kind of thing typically dies down when there's a Republican in the White House:

The breakaway state of Jefferson is a decades-old idea, but it has been revived in earnest in recent years by residents who say they are fed up with their voices being drowned out in Sacramento, where outspoken urban Democrats hold a vise grip on the state Legislature.

Supporters say overregulation has hobbled rural industries such as timber, mining and fishing and that the state's high taxes and cost of living are driving young people away, quickening the decline of small towns. They chafe under California's strict gun-control policies and are infuriated by its liberal immigration laws.

They cite California's new gas tax increase of 12 cents per gallon, saying it has an outsize impact on rural people who drive farther for work and basic needs such as hospitals, schools and grocery stores.

How likely is it that a new state will be broken off, like a piece of a Kit Kat bar, from California? Not likely at all, experts say.

Eric McGhee, a political scientist at the Public Policy Institute of California, said that while you can "never say never," there are too many legal obstacles to overcome.

"It's easy to think that because there's this large piece of territory, that it's a large share of California in terms of the population," he said. "That's just not the case. ... It's an absolutely minuscule portion of the state's population."

I do think it's reasonable to question whether or not the revival of this movement in California is somehow tied to Russia. We know that Russia wants to destabilize our political and social life in this country. This is why they support the NRA, after all. Why wouldn't they find a way to help witless people in California break up their own state?

These are not serious or reasonable people, by the way:

"You're the ones being exterminated by a lack of liberty," said Mark Baird, a Siskiyou County rancher.

When there's a Democrat in the White House, talk of secession or creating new states (in order to add 2 Republican Senators and a Congressman or two) crops up because some people can't handle being governed in a responsible manner. The very idea that someone might get welfare benefits throws these people into a frenzy.

With Trump in the White House, there seems to be an unleashing of white supremacy and anti-government fervor that no one thought they would see. Actual Nazis are winning primaries, and the GOP, as a whole, has descended into the depths of madness.

Overall, I would say that there is a blue wave coming this year, and it will throw a lot of Republicans out of office, particularly in California and the Northeast. A plan to create a new state out of Northern California will get a lot of support once people realize that it would essentially be a carbon copy of Wyoming or Idaho. If you're facing oblivion, nothing like this looks too crazy.

You can't take this lightly, though. It's anti-American, anti-democratic rhetoric. We used to call it sedition until that term fell out of favor. Russia has supported several secessionist movements in this country in recent years, and it's all part of their effort to destablize Western democracy.

A Russia-linked Facebook group asked a Texas secessionist movement if it would participate in a series of anti-immigrant, anti-Hillary Clinton rallies it was planning to hold across the state last November, the group's president told Business Insider on Thursday.

"When they decided to start doing all these 'Texit' rallies, they reached out and wanted us to participate," said Daniel Miller, the president of the Texas Nationalist Movement. "And we said 'thanks, but no thanks.'"

The Facebook group, called Heart of Texas, had over 225,000 followers as of last summer. It was shut down last week as part of Facebook's takedown of accounts and pages "affiliated with one another and likely operated out of Russia," a Facebook spokesman told Business Insider on Wednesday.

Russia has a long history of working to cultivate Western separatist groups. The group Yes California, for instance, set up a makeshift embassy in Moscow in December in partnership with far-right Russian nationalists who enjoy Kremlin support while promoting secessionist movements in Europe and the United States.

If there was ever any doubt that we need a government that will protect us from outside influences, there you go.