The British Response is Weak and Ineffectual 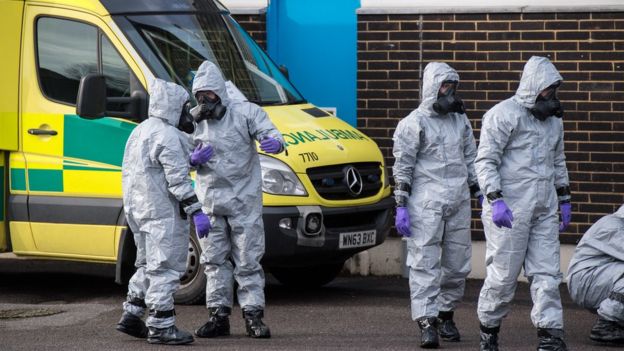 The problem here is that Britain's response to Russian agents deploying a nerve agent in one of their towns is too measured and calm:

More than 240 witnesses have been identified as police investigate the Russian ex-spy poisoning "at speed", the home secretary has said.

Amber Rudd praised the professionalism of the police who are now looking at more than 200 pieces of evidence.

The investigation into the attempted murder of Sergei Skripal and his daughter Yulia is now in its sixth day.

Meanwhile, Det Sergeant Nick Bailey, who fell ill attending the pair, has denied he is a "hero".

Mr Bailey remains seriously ill but is awake and engaging with his family.

Ms Rudd said both Col Skripal, 66, and his daughter, 33, who are being treated at Salisbury District Hospital, remain in a "critical but stable condition" after being exposed to a nerve agent.

The pair were found unconscious on a bench in Salisbury, Wiltshire, on Sunday 4 March.

Given all of the stupid shit on television right now, I can't understand why this isn't a bigger deal. The fact that Russia believes it will get away with killing people on foreign soil should be a wake up call to every Western democracy. The sad fact is, no one cares and no one is concerned about this. When it happens in the United States, maybe then people will start to understand that Russia is a lawless state that is using terrorism as a means of eliminating dissent.

What are they waiting for in Britain? An engraved invitation to complain to the Russian Ambassador? They should have started throwing people out of the country as soon as they knew what had happened.

How reassuring. You've been exposed to nerve agent handled by a Russian assassin. Please go wash your stuff!

Up to 500 Salisbury pub-goers and diners have been told to wash possessions as a precaution after nerve agent traces were found.

Trace amounts of the substance used to poison ex-Russian spy Sergei Skripal and his daughter were found on and around a table where the pair ate at Zizzi restaurant, the BBC has learned.

The table, along with other items, has been removed and destroyed.

Scientists have advised police it could take weeks for the premises to reopen.

Traces of the nerve agent were also found at the Mill pub in Salisbury.

Sergei and Yulia Skripal, who remain in a critical but stable condition in hospital, are understood to have eaten on a table away from other diners.

Prof Dame Sally Davies, the chief medical officer for England, said the risk of harm to fellow diners was "low".