Rumblings Within the Cult of Trumpism 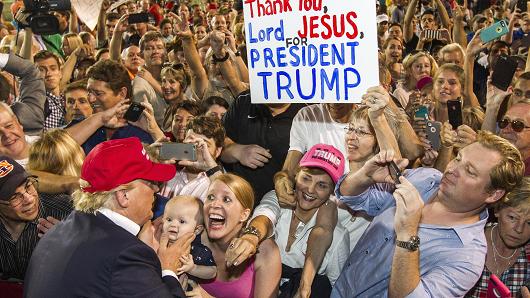 Republicans are freaking out. Their "fiscal conservative" mask has slipped. Trump has revealed that balancing the budget doesn't mean anything. I want to ask them why they just noticed this. I want to point out what we knew all along--Trumpism is a cult that will bankrupt America. The budget bill Trump signed into law was proof that the Republicans in Congress are addicted to spending money they don't have:

I don't feel sorry for disillusioned Trumpists. They were given the same information the rest of us were, and I feel pretty good about knowing it was always a scam:

We hear all the time these days that President Trump is “undermining democratic norms.” Well, how about this for a democratic norm? The policies people vote for in an election should be the ones that get implemented after the election.

Oh wait, that would mean we had an actual, functioning republic, wouldn’t it? But we don’t. We have a Swamp, and this week’s public policy shambles in Washington – resulting in a fiscally incontinent and democratically illegitimate $1.3 trillion omnibus spending bill – showed that the Swamp is not being drained but steadily refilled.

You may not agree with – in fact you may violently disagree with – President Trump’s pledge to “Build the Wall.” But can there be any voter in America who was unaware of that promise by the time of the 2016 election? Of course not. So it is simply staggering to see the sheer scale of our elected representatives’ arrogance in refusing to do what the American people voted for.

It’s not just that the spending bill fails to fund the construction of a border wall along the lines the president has proposed. Almost unbelievably, it literally prohibits building a concrete wall or other prototypes. Not so much “Build the Wall” as “Ban the Wall.”

The American people didn't "vote" to build a wall, asshole. About 70,000 of them were targeted and mislead into voting for a candidate who was colluding with Russia after their hackers stole E-mails from the Democratic Party. If the roles were reversed, the focus of your attack would be squarely upon the candidate who used Russia's help to win. Why the selective outrage? Your guy cheated. Now you're mad he's cheating you, too? Fuck your feelings.

Conservatives are lamenting the fact that they elected a not-too-bright con-man and are watching the GOP Congress ram fists full of money into their pants before they leave town in January. Thank God they'll never be able to lecture anyone about fiscal responsibility ever again. Hypocrites.