People Want Stability and They Are Not Getting It 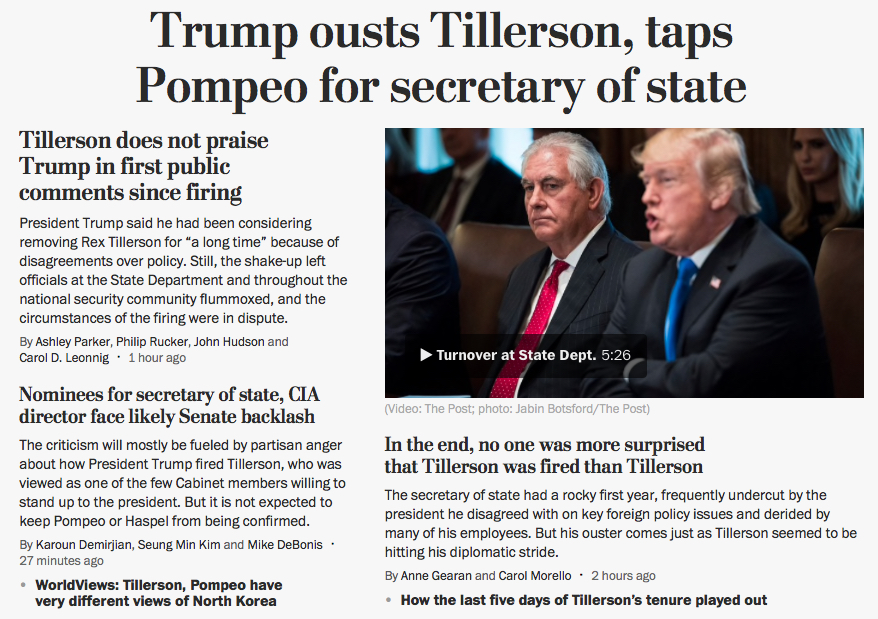 The Washington Post does a great job of letting anonymous sources run wild today. I'm sick of this. Just name them! Who cares if they stop leaking information about the Trump Regime? No one is going to be around there for very long anyway. Behind every one of these stories is someone regularly saying things to the media that is disrupting the way our government used to work. They are savaging it within because of how sick and incompetent Trump really is. They need to resign and make a stand against Trumpism. The fact that they won't is telling. The fact that our government is out of control and no one has the courage to do what is necessary tells you everything you need to know.

Unless, of course, someone realizes that we don't have to be, and that there is nothing more valuable than a stable, functioning American government that works within the boundaries of accepted normalcy.

One of the bigger picture issues that deserves more focus right now is the fact that the American government is not stable at this present moment, and hasn't been since Trump's inauguration. There are numerous agencies in complete disarray and are being mismanaged. You have grifters like Zinke, Carson, Pruitt and DeVos running the agencies they run entirely to ruin. And that's just four random ones. Has anyone noticed what Perry is doing to the Department of Energy? What Shulkin is putting the Veteran's Administration through? It's a nightmare.

A stable American government is needed to maintain the way of life we are all accustomed to. When this massive machine starts to fly apart, people get hurt in ways that are impossible to measure. The very fact that our State Department is falling apart should be reason enough for Trump to have to resign in shame. There are seven hundred other things that are just as bad and just as shameful as this, so take your pick.

We have had stable governance for a long, long time. We got used to it. We lost it several times during the 1960s, through the Kennedy assassination and the hell of the 1968 election. What we are seeing now is unprecedented because what guided America through dark times was a functioning, capable bureaucracy that was hardened and trained to keep functioning when the two political parties wrestled for control. Right now, the Republican Party is letting the government fall apart because it is afraid of the wrath of the base that has formed around Trump. What would never have been allowed twenty, thirty, forty years ago is now a new way of doing things. It wasn't allowed because we have proof of that in the fact that there used to be members of Congress who would fight a president from their own party out of principle. That's gone now. Anything goes.

People are going to have to stand up to Trump's racist mob and start voting for stability. We have to restore sanity and dignity in this country. If you need any other reason than that, I don't know what to tell you.