I Hope Jeff Sessions Does This to Andrew McCabe 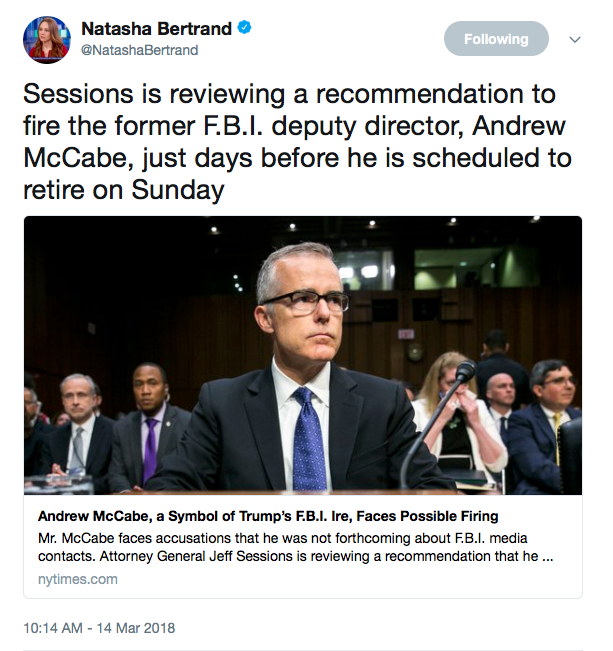 You can count me as someone who wants the Attorney General to fire Andrew McCabe just days before his retirement. I want the Trump regime to commit petty, senseless acts against the people who have dedicated their lives to public service because it will reveal who they are to even their most staunch supporters. I am completely in favor of this because it would send a clear message to the entire Federal work force that they are mere cannon fodder in this war between the rule of law and the gimme gimme kids in power. This will be another fiasco, and it is one that will backfire on them in terrible ways.

Let's put it this way. Firing McCabe would be akin to stepping on a thousand rakes. It would release a whole lot of folks sitting on the fence in every Federal agency. They would count things on their hands, log into their encrypted personal throwaway devices, and they would hit send before the end of the goddamned day.

Don't weep for poor Mr. McCabe. He will land in the private sector. He is a senior member of the FBI and there are so many people willing to hire him and overpay him that it isn't even funny.

In several years, when there are sensible people running the government, he can go back to work at the FBI, and they'll have him hold down a chair for a few days. After that, someone will sign off on his retirement and he'll get his full benefits package, as it should be. Regardless of your partisan leanings, anyone who dedicates their life to public service is entitled to a full retirement if they meet the criteria. McCabe clearly does.

If Sessions fires McCabe, it will activate a response inside of the FBI. They will come at every son of a bitch who leans towards Trump, and they will come at them hard. Within the FBI field office in New York City, for example, are a whole lot of Special Agents and whatnot who are still pro-Trump. If you slash McCabe out of the workforce days away from his legitimately earned payday over a bullshit recommendation, they will see it as a fait accompli that the next Democrat who sits in Session's seat will come after them and slice them out of the workforce whether or not they have a pension in hand. It will tell the rest of the "Deep State," which does not exist, that they now have a reason to leak whatever they want.

This should be fun. Restraint is not a quality one finds in a Trump flunky.