The Justice Department just created a martyr for the cause. It's a massive miscalculation and a mistake that will come back to haunt every one of these sons of bitches:

Attorney General Jeff Sessions fired former FBI Deputy Director Andrew McCabe late Friday, less than two days shy of his retirement, ending the career of an official who had risen to serve as second-in-command at the bureau.

McCabe had more recently been regularly taunted by President Donald Trump and besieged by accusations that he had misled internal investigators at the Justice Department.

McCabe had been expected to retire this Sunday, on his 50th birthday, when he would have become eligible to receive early retirement benefits.

But Friday's termination could place a portion of his anticipated pension, earned after more than two decades of service, in significant jeopardy.

A representative for McCabe said he learned from a press release that he had been fired by Sessions. A Justice Department spokesperson pushed back, saying, "Mr. McCabe and his attorney were informed in advance of any news media."

The origin of his dramatic fall stems from an internal review conducted by Justice Department Inspector General Michael Horowitz. That report -- the details of which have not been publicly released -- is said to conclude that McCabe misled investigators about his role in directing other officials at the FBI to speak to The Wall Street Journal about his involvement in a public corruption investigation into the Clinton Foundation, according to a source briefed on it.

They fired him because he didn't find a way to produce phony charges about the Clinton Foundation? I don't understand where they think they're going with this, but okay.

CNN reported on Wednesday that the findings in Horowitz's report on McCabe were referred to the FBI's Office of Professional Responsibility, staffed with career officials, who recommended McCabe's termination. McCabe, accompanied by his lawyer, tried making a last-ditch effort Thursday to avoid the firing, meeting with officials at the deputy attorney general's office at the Justice Department for several hours while Sessions was traveling, but to no avail.

"After an extensive and fair investigation and according to Department of Justice procedure, the Department's Office of the Inspector General (OIG) provided its report on allegations of misconduct by Andrew McCabe to the FBI's Office of Professional Responsibility (OPR)," Sessions said in a statement late Friday. "The FBI's OPR then reviewed the report and underlying documents and issued a disciplinary proposal recommending the dismissal of Mr. McCabe. Both the OIG and FBI OPR reports concluded that Mr. McCabe had made an unauthorized disclosure to the news media and lacked candor − including under oath − on multiple occasions."

Number one, Mr. McCabe will get his pension. Decent people will see to that. It might take a few years to flush the garbage out of the Justice Department, but he'll get what he has earned. Number two, this is a wake up call for every Federal employee. Unleash whatever negative stuff you have on these Trump people because they have declared war on you for respecting the rule of law.

McCabe knows how the game is played:

A key portion of former FBI Deputy Director Andrew McCabe's testimony to the House Intelligence Committee has served as the backbone for a controversial memo propped up by Republican lawmakers, but McCabe now tells CNN that House Republicans twisted his answers.

The highly controversial memo from Committee Chairman Devin Nunes claimed McCabe testified that "no surveillance warrant would have been sought" for a Trump campaign aide without a disputed opposition-research dossier on Trump and Russia. Not so says McCabe -- the former No. 2 official at the FBI who signed one of the applications to surveil former Trump campaign foreign policy adviser Carter Page.

"We started the investigations without the dossier. We were proceeding with the investigations before we ever received that information," McCabe told CNN as part of a wide-ranging interview. "Was the dossier material important to the package? Of course, it was. As was every fact included in that package. Was it the majority of what was in the package? Absolutely not."

Would you stake your professional reputation and your career on whether or not we should have been keeping an eye on Carter Page? Plenty of Republicans just chose to do that. McCabe has called them out on it. We'll see who wins this fight.

This is an attempt to intimidate, coerce, and eliminate whistleblowing. In other words, welcome to what has to be the third or fourth or fifth attempt at obstruction of justice from the Trump White House. If you think Jeff Sessions did this himself, I think you better reconsider.

Have you ever, in your entire life, seen so many traitors and so much obstruction of justice in your life? The knee-jerk response is to wonder whether Mr. McCabe had this coming. In Trump world, we all have it coming. What happens next will decide the fate of our democracy, and that's not hyperbole. That's what is at stake right now. Whether we are a nation of laws and not strongmen and tyrants is what is laid before us tonight.

Tell me this isn't obstruction of justice in a damned nutshell: 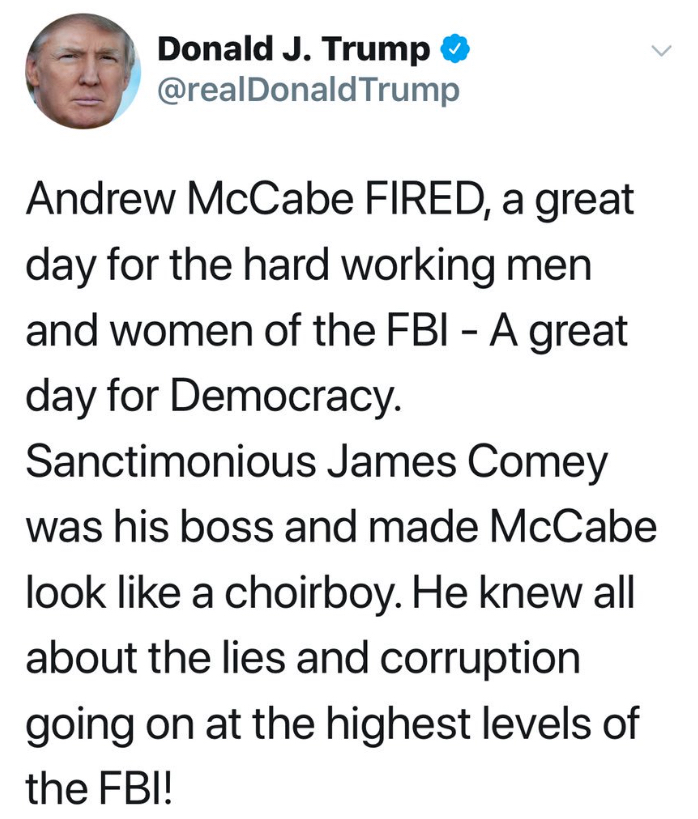