Trump Orders the Military to Throw Him a Parade 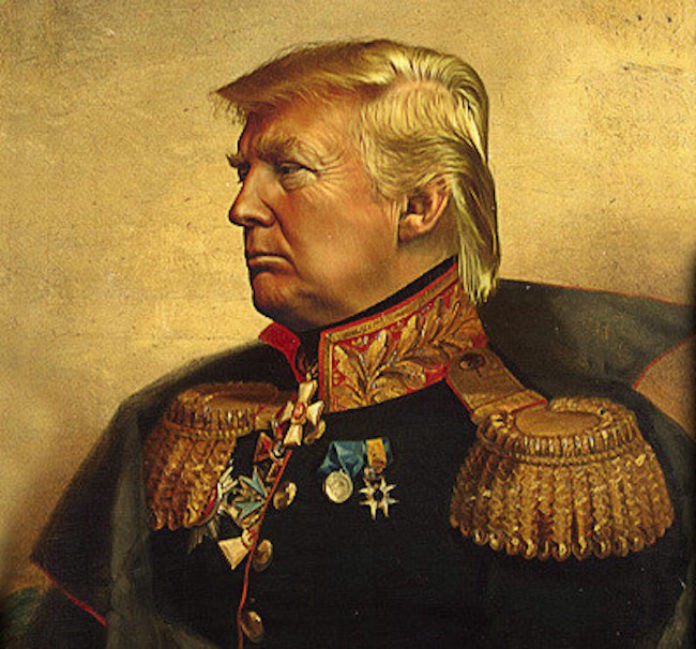 There are three generals working for Trump. Generals McMaster, Kelly and Mattis were supposed to put a lid on this sort of thing. They were supposed to be a calming force that would keep Trump's worst character defects in check.

Well, so much for that:

The spokesman described the planning process as being in its "infancy."

"The marching orders were: I want a parade like the one in France," a military official told the paper. "This is being worked at the highest levels of the military."

What McMaster should have said was, "Mr. President, the American military does not do parades of this nature. We are strong, we are powerful, and we have the self-confidence and self-respect to keep our military hardware where it belongs--ready to be used and ready to defend ourselves and our allies. Small, weak nations stage parades. Dictators hold parades and watch non-functioning equipment roll by. Great nations do not need to advertise their strength. Why don't we put a company on horseback and have the band play instead, sir? We can have the Old Guard roll down past the White House on a Sunday morning with their horses and caissons and you can clap and cheer and we'll give you a balloon afterwards. We can even authorize you a complimentary Military Horseman badge. How does that sound, champ?"

And if Trump had persisted, they should have all resigned. George Marshall would have muttered and quit. Creighton Abrams would have told him to go fuck himself and walked out. Norman Schwarzkopf would have laughed and told him to go find someone to make him a uniform with shiny buttons. Hell, even Colin Powell would have resigned after some hemming and hawing.

And, of course - you know the drill.

Republicans are allowed to use the military as props. This is being tolerated because Trump self-identifies as a Republican.

If a Democrat were to suggest using the military to stage a parade in order to improve his poll numbers, well, the outrage and the refusal to do so would cross the line into mutiny.

This sort of thing is entirely OK because Trump is a Republican. Democrats are never, ever allowed to use the military without first being subjected to howls of outrage.