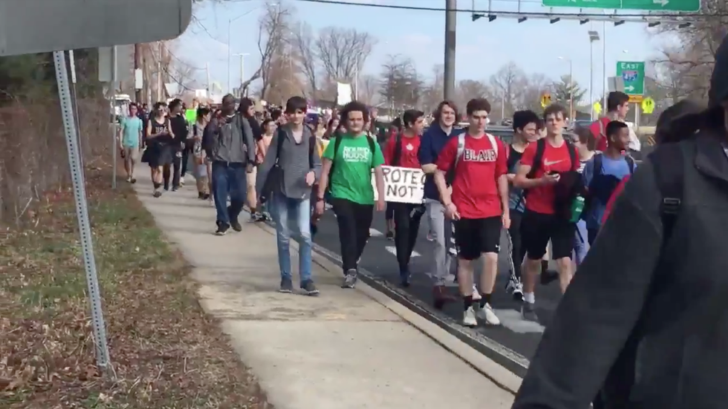 So, a bunch of kids have just decided to walk out of school and march to the U.S. Capitol today:

Hundreds of students walked out of class Wednesday and are marching toward the U.S. Capitol to demand action on gun control.

Students at Montgomery Blair high school in Maryland planned a walkout through social media, according to a reporter from ABC 7.

According to Fox 5, students at Richard Montgomery and Bethesda-Chevy Chase high schools are also taking part in a walkout.

What I love about this is that there are two certainties: one, the NRA is still counting on being able to denigrate anyone who dissents and buy off all the Congressmen they need and, two, the Republicans still have no plan or strategy to deal with a suddenly-invigorated anti-gun movement in this country.

Here is my unsolicited advice to everyone in Congress--you can't win against a popular revolt led by people who will be of voting age in 2020 and you better empty your coffers of every dime given to you by the NRA. If you're a Democrat who has NRA money on you, get rid of it fast. Give it to a good cause. Promise that you will never take another dime of it again. If you're a Republican, I can't help you. The stink of Trumpism and the flopsweat and the failure are too much for a polite society. You might as well retire now and avoid holding any town hall meetings. Start looking for work. Get used to being screamed at by random strangers every single place you go for the next ten years.

Be prepared, though. Republicans want to survive, so they will pass token gun control legislation and hope the kids get bored, disaffected, or distracted. I am willing to bet you that a new national movement will take shape in the months and years ahead, and it will be led by people who don't want to get shot at school or in the workplace or the movie theater or at a concert or wherever they live and work.