Marco Rubio is Still a Weasel 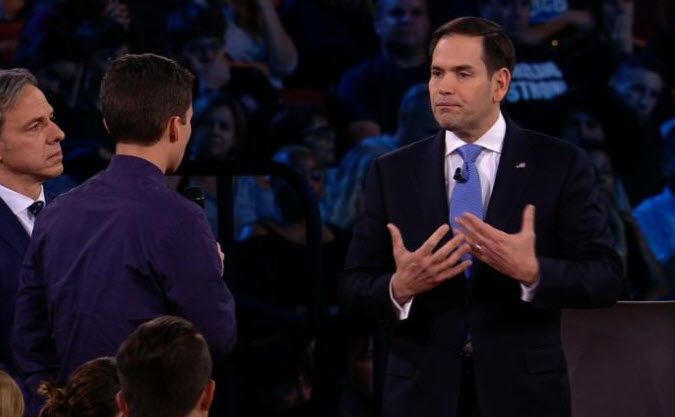 If anyone wants to hand out awards for who can do a reasonable job of acting like a weasel in public, why not set aside two or three for Marco Rubio?

Appearing at a CNN town hall in Florida, Rubio repeatedly made news on the issue of who should have access to firearms by sharing his beliefs on what would have support in the Senate, as well as taking sharp criticism from the audience, which included family members of those killed in the shooting.

Someone had to show up, and Rubio made a calculation. If he put in an appearance, took the heat directed at the massive gun lobby in this country, and rode it out, he would secure himself a place at the table that would allow him to lead on this issue. He desperately wants to be president, and he knows that if he can position himself with gun rights supporters as a clever, moderating force that doesn't harsh their buzz, there's a good chance he will survive the coming implosion of the post-Trump GOP.

Number one, Rubio isn't going to do anything that pisses off the gun industry, the NRA, or any of the NRA-sympathetic organizations in this country. He needs their money and their votes to survive in Florida as a Senator, and he damned sure needs them when 2020 comes around.

Number two, Rubio has a job for the next five years. He's not up for re-election until 2022. That's three lifetimes in our current political environment. He'd love to trade the voters in Florida for the national stage, sooner rather than later, so nothing he does is going to affect where he sits right now. The only voters he cares about are in New Hampshire and Iowa.

Number three, Rubio has a tin ear for politics and lousy timing. If he has substantively done something within the last year about guns, maybe he'd have some standing. All he's ever done is support the NRA's agenda and clear away any opposition to gun control. He consistently votes like someone who's been bought and paid for. His appearance was a love letter to the home office. He's not a leader, and he's never going to lead on any issue unless you have dollar signs already in his pocket.

There will be token legislation soon, but it will fall far short of what is needed. It will be watered down and gun lobby approved or it will face the filibuster and die. Do not expect any common sense and don't imagine the Democrats will get any tough amendments tacked on to any package that Rubio and his cohorts can put together. No one wants to send anything to Trump's desk without crayons and a love note to Putin already on it.

I also noted that the whole thing was a macabre dance through the subconscious of the Infowars crowd last night. The NRA used to be able to send out a rolling bag of trash like Dana Loesch and use her housewife bonafides to scream down criticism. Her entire schtick consists of insulting the manhood of anyone cuck who thinks the criminally insane shouldn't already be armed for the fight against the vast powers of the New York Times' metro desk. Hasn't anyone paid attention to what this horrid woman has been saying all of her public life? Good God, whatever used to count for standards in this country are gone. Trump has normalized the idea that you can bring out batshit crazy and call it a moderating voice for sensible discourse. Fuck that shit.