John Kelly is the Worst One of All 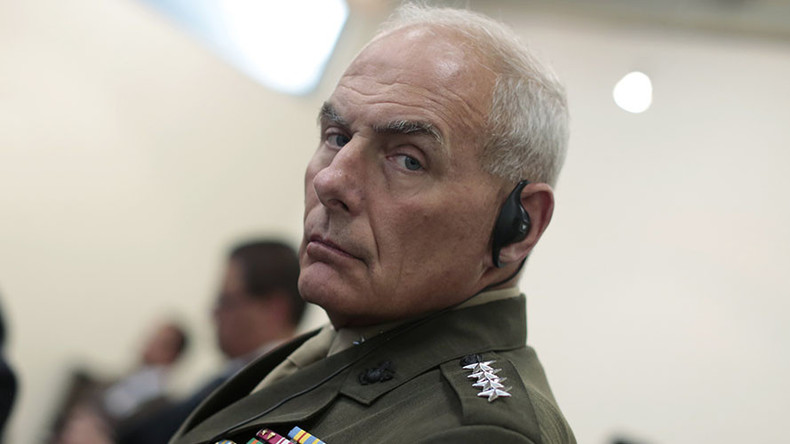 Who is the worst member of the Trump Regime? We're talking about a race for the bottom that includes actual Nazis and wife beaters. We're talking human beings so awful, there's a good chance the country will need twenty years to recover from their presence in the halls of power.

Among the many people agitated this week over John F. Kelly, the White House chief of staff, was President Trump. And among the people the president called to express dissatisfaction, according to those close to him, was none other than Reince Priebus, the previous chief of staff, who also irritated Mr. Trump.

The idea that the president would confide grievances over Mr. Kelly with the person he pushed out to hire Mr. Kelly is yet another indication of how upside-down Mr. Trump’s world can be. In the West Wing, various characters fall in and out of favor with such rapidity that it is never entirely clear who has the president’s ear.

For now, it is Mr. Kelly who is in trouble. The president has little tolerance for aides who attract negative media attention that spills onto him, and in recent days Mr. Kelly has drawn a string of unwelcome headlines. He roiled negotiations over immigration legislation by declaring that some immigrants were “too lazy” to apply for legal status. And he initially defended a deputy accused by two ex-wives of physically abusing them.

All of which has again fired up the will-he-last speculation that has erupted periodically in the six months Mr. Kelly has been in office. Mr. Trump has recently asked advisers what they think of Mick Mulvaney, who currently holds twin posts as director of the White House budget office and the Consumer Financial Protection Bureau, as a possible chief of staff, according to two people briefed on the discussions.

Since there's no chance anyone hired to replace Kelly will get Trump under control, take his phone away from him, or do anything to remove the stench of failure from this White House, it really doesn't matter if Kelly stays or goes. This particular hell has a revolving door that will give you a black eye when you cross the threshold.

I don't see much of an upside to Kelly's resignation because they're all shitty people. This is our new normal. The re-org chart for Trump's White House is fated to look like a howling abstract painting that has been burned by vandals. It will all be horrible, and it will all smell like the ass end of the worst slaughterhouse in town. There is such a heavy permutation of failure surrounding these people that, as soon as they come into contact with Trump, there is an immediate cessation of joy. Friends drop away. Cold shoulders appear out of nowhere. Light bends around the place and rain falls constantly. Defense lawyers start calling, looking to score an easy half a million in fees. Small dogs begin barking, and anything with teeth looks for open skin.

The Rob Porter scandal would have ended any normal presidency in the modern era. I think it is entirely responsible to speculate as to how many people working for Trump are serious deviants. The FBI has these numbers on the people in Trump's inner circle. How many of them have a serious painkiller addiction? How many of them are beating their wives on a daily basis? How many are having deviant sex with animals as part of an overall life plan that includes public displays of white supremacy? Which Trump minion has a summer home in the part of Thailand where the police are too ashamed to go? Is there a pie chart that shows how many members of the Trump Regime are known to the police as being serial pig fuckers? How many have been arrested in the middle of a peep show after refusing to give someone a complimentary rim job? Who's the guy who keeps shitting on the floor because he can't stop all of the flashing lights in his diseased brain? You're telling me there's no one working for Trump who has a scat fetish and terrorizes chipmunks? Come on. We all know they're mind-blowingly awful human beings.

The Trump White House is the place where only a person who has flushed decency down the toilet can fit in and pretend to be part of society. If there is absolutely no chance a reputable person will meet with you to discuss employment opportunities, relax. Trump and his goons will find a way to feed you into the gaping maw of their terrible machine. They will use you as fodder for their war against everything good, and if you come out of it alive with only a dozen years in the slammer, you might be able to get work spinning signs for adult toy emporiums out by the freeway. Never forget. When you work for Trump, you gotta bring your own lube.

Honestly, why don't the Russians just move in and get it over with already?