It's Time For Bush to Speak Out 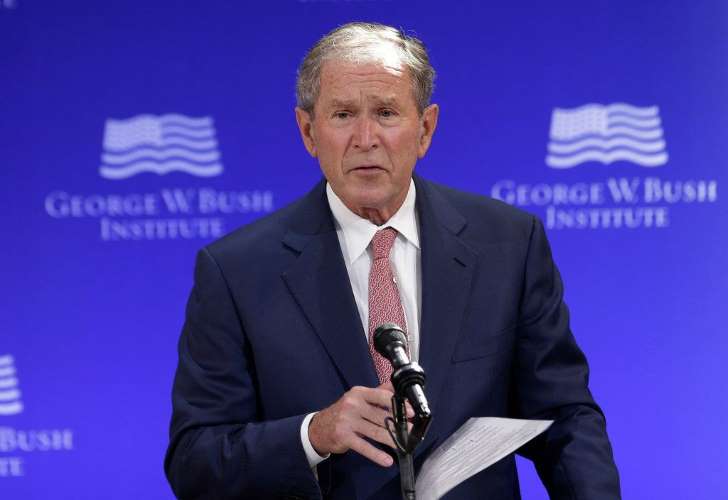 I'm never going to look to George W. Bush for inspiration or leadership. He is fundamentally incapable of doing the right thing at the right time. He needs to be a more forceful voice for democracy, decency, and use whatever legitimacy and influence he has left to give cover for Republicans who refuse to support Trump (God knows that David From, Bill Kristol, and Max Boot did their level best to support Bush in his time of need). In this, as in every other endeavor, I expect him to be a colossal failure and a disappointment.

Here's what should be evident to every decent American. Trump is an illegitimate president. He should be removed from office as soon as possible. I do think it would be extremely helpful if all of our living former presidents were to speak out with more conviction on the state of our democracy and the threat posed by the Russian regime:

Former President George W. Bush appeared to take aim at President Trump on Thursday when he said at an economic summit in the Middle East that there was "pretty clear evidence that the Russians meddled" in the 2016 U.S. president election.

Bush made the comments in a talk in Abu Dhabi, the capital of the United Arab Emirates. He was appearing there as part of a conference put on by the Milken Institute, a think tank based in Santa Monica, California.

While Bush did not directly name Trump, his comments did appear to target him. Trump has consistently disputed allegations of Russian interference in the election or that members of his campaign team in any way "colluded" with Moscow.

"Whether (Russia) affected the outcome is another question," Bush added.

"It’s problematic that a foreign nation is involved in our election system. Our democracy is only as good as people trust the results," he said.

Intelligence agencies have concluded Russia did meddle in the election and numerous investigations are under way to determine whether Trump’s campaign aided the Kremlin.

Bush also said the U.S. needs to reform its immigration law and described Russian President Vladimir Putin as "zero-sum." Bush said of the Russian leader: "He can’t think, ‘How can we both win?’ He only thinks, ‘How do I win, you lose?’”

Bush needs to find the courage to call out Trump by name. Every establishment Republican who remains silent is complicit in the normalization of Trump and the degradation that comes with it. I ain't worried about Obama, Clinton or Carter--they know the score.

We missed a chance to change our assessment of Russia when Obama was president. We should have caught the warning signs that Bush alluded to. Russia is not a military threat to the United States or to the NATO alliance. It is using cyberwar to undermine Western democracy and institutions. This needs to be countered and rolled back through a concerted effort that involves everyone. The Dutch were all over this issue, and if NATO is to remain a true alliance, everyone has to build the infrastructure that puts Russian efforts in check.

I also think Bush should put to rest the idea that it was a good idea to look into "Putin's soul" and make foreign policy decisions based on what he saw. Now is a great time for him to try and rehabilitate himself and atone for past mistakes. No one should hold their breath waiting for Bush to acknowledge that Dick Cheney was really in charge and incompetence was widespread throughout his administration. Every penny his "institute" collects should be given to the veterans of the wars he started.

I do think history is going to give Bush more of a pass than he deserves specifically because of how bad Trump is in comparison, and I don't think we should accept that verdict. I think we should remember how much damage Republican governance has done to this country, even before Trump came down the escalator.