I Love the BBC 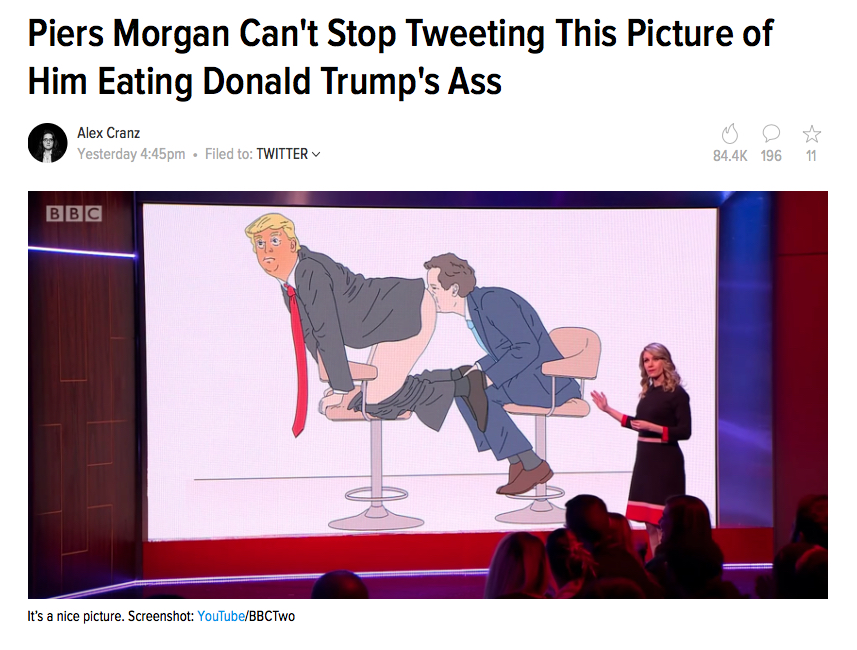 This made my whole day:

Bless Pier Morgan’s heart, but the man appears to be terribly fixated on Donald Trump’s tangerine hole. I believe we can infer this from an image Morgan has repeatedly tweeted today of Donald Trump kneeling on a chair, pants down, with Morgan leaning in, wearing Trump’s cheeks like the Drunk Elephant Babyfacial I spent $80 on.

To be fair to Morgan, he could merely be sniffing. Perhaps he is gently resting the tip of his nose on Trump’s rectum. Maybe he read up on colonoscopies and is double checking the White House doctor’s work. Any way you look at it that is clearly a picture of Piers Morgan with his face pressed firmly to Donald Trump’s ass and Morgan has tweeted it repeatedly today.

Clearly, Morgan is eating that ass, and that's why I love the BBC. How long do you think it will be before Trump goes to the British Isles? Over there, they know how to do free speech. Over there!

on February 03, 2018
Email ThisBlogThis!Share to TwitterShare to FacebookShare to Pinterest
Labels: Editorial, Opinion