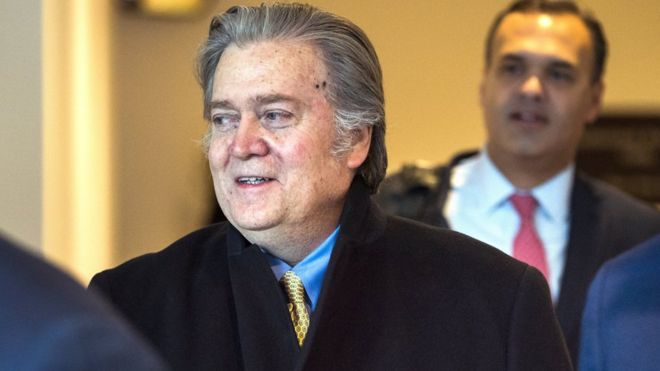 President Donald Trump's former chief strategist, Steve Bannon, has been interviewed as part of an investigation into alleged Russian meddling in the 2016 election.

He met with special counsel Robert Mueller, who leads the inquiry, over two days this week.

But he left his post in August amid reports of tension with other aides.

Mr Mueller is leading an investigation into whether the Trump campaign colluded with Russia to influence the US election. Both Moscow and Mr Trump deny this.

There are reports that Bannon actually spoke to the Feds for more than 20 hours. Who does that? Does an innocent person who doesn't know anything about any lawbreaking and any possible collusion have enough material to keep people so busy they cover several days and multiple meal breaks? No, of course not.

Bannon wants leniency and he wants to make a deal before everyone gets theirs. How can you blame a hobo for trying?