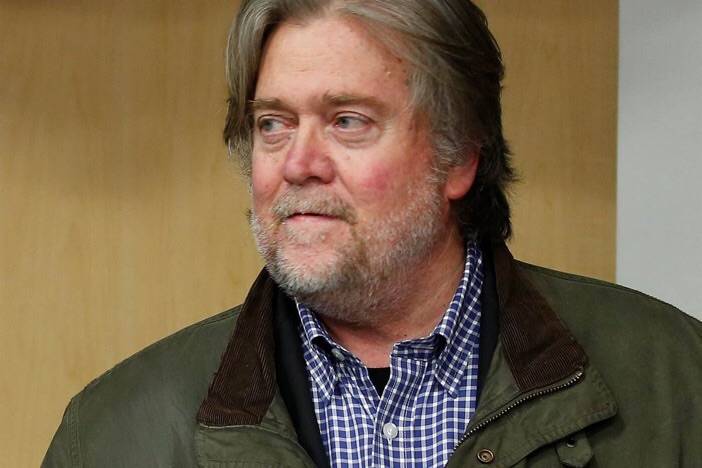 Steve Bannon has always been a bum, and when Congress tried to roll him this week, someone at the White House realized that this was a bad thing:

The White House believed it had an agreement with the House Intelligence Committee to limit questions for Steve Bannon only to events on the presidential campaign, and not during the ousted former chief strategist's time in the Trump administration, an official told CNBC.

According to the White House official, who spoke on the condition of anonymity, staffers for the committee and the White House on Friday discussed the parameters of Bannon's testimony. The White House emerged from that conversation believing it had an agreement to limit the questioning of Bannon just to events during the campaign, and not during the transition period or his time in the White House.

Then, hours into Bannon's closed-door testimony on Tuesday, Bannon's lawyers informed the White House from Capitol Hill that the questions would extend beyond the scope of what the White House understood the agreement to be. At that point, the White House told Bannon not to answer any further.

"We said 'Hey, hey, pump the brakes,'" the official said Wednesday. "We said to Bannon, 'Don't answer those questions because we haven't agreed to that scope under the process.'" The committee's ranking Democrat, Rep. Adam Schiff, said the White House did not inform him or his fellow party members on the panel about such an agreement.

"That was never conveyed to the minority," Schiff said Tuesday night. "And I think it came as quite a surprise to our entire committee frankly, apart from the majority staffer that was involved in that communication."

The Trump administration official declined to say who initiated the mid-testimony phone call or who took part on behalf of the White House. At that point, House Intelligence Committee Republicans and Democrats joined forces to issue Bannon a subpoena on the spot to compel his testimony. It is not clear what, if any, questions Bannon answered after that. A Reuters report said the former top Trump aide refused to comply with the subpoena .

Bannon did not comment substantively Tuesday evening as he left Capitol Hill. The House Intelligence Committee didn't immediately respond to a request for comment from CNBC. Despite the attempt to limit questioning of Bannon, the White House official insisted the administration is not asserting executive privilege. "We're not asserting anything," the official said.

"They need to discuss it with us. There's a process that's existed for decades."

Oh, come on! The chances of anyone working in the Trump White House knowing how anything works are slim and none.

Here's what we know--the Mueller team is zeroing in on obstruction of justice charges for everyone involved in trying to explain Donald Trump Jr's meeting with Russian intelligence operatives in the bowels of Trump Tower in June of 2016. That includes Trump and it includes everyone who tried to be cute about it and suggest that they were talking about adoption instead of releasing stolen E-mails from the Democratic National Committee.

This is where the collusion was formalized and established as fact. This is where a foreign power's agents assisted a Republican Party candidate in winning the presidency. This is ground zero for every nightmare scenario and it's where the bodies were buried. An American election was stolen from the rightful winner by Americans aligned with Russians in a criminal conspiracy. The only reason why the White House is telling known stumblebum Steve Bannon to shut up is centered around the fact that he was either a participant or had knowledge of the coverup and thus knew the details of the crime itself.

Bannon was in the thick of things when this story broke and he is clearly a witness to something that looks like obstruction of justice to the people investigating this. Trump's GOP allies in Congress are obstructing justice in their own way by throwing sand in the gears of the investigation. History is going to be savage to the public legacy of these people, and rightly so.

I believe that there will be a cottage industry on the left that will grow out of necessity in the years ahead. It will focus on reminding the American people that each and every Trump Administration official has been complicit in a crime. This stuff is not going down the memory hole. Twenty years from now, some low-level Trumpkin is going to try to get appointed to a Federal position, and that's when a dozen knowledgeable people need to spring into action and remind everyone that these jackasses used Russian help to steal everything that wasn't nailed down.

Anyone who thinks Bannon isn't going to exact revenge for how he has been treated is fooling themselves. This is a man who will howl for blood until he gets it. His whole professional life has been built around nurturing bizarre, hateful grievances.