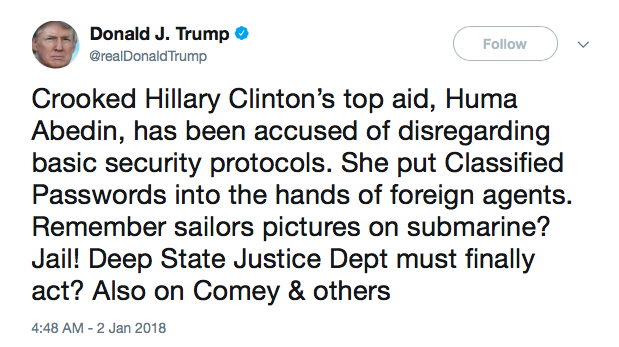 One of the most useless functions of political punditry is the analysis and examination of Trump's tweets. They don't mean anything, other than the crazy stuff they really do mean, which indicates that he is nuts.

There is no way for a rational human being to read his tweet as anything other than the confused rambling of a dangerous fool. I think it's safe to say that Chief of Staff John Kelly has failed to get control of Trump. I think it is obvious that, before five in the morning, the president shouldn't be making comments about anything. And Hillary Clinton has clearly remained embedded in his psyche, causing him to wake up screaming at all hours of the night.

Either that, or Robert Mueller is going to indict someone today.