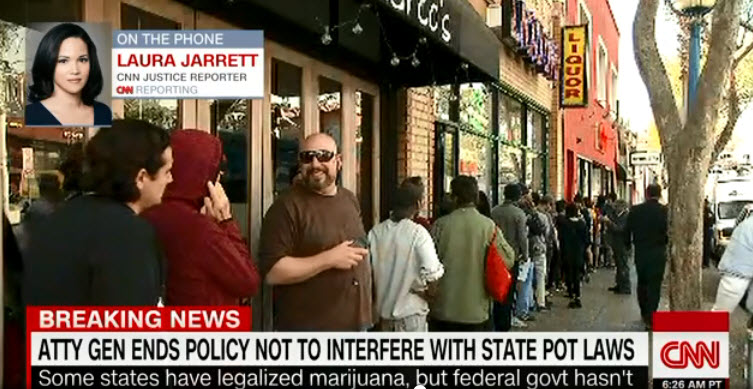 Thanks to Jill Stein voters, Vladimir Putin, jackasses who wrote in Bernie Sanders, select members of the White Working Class who had economic anxiety, and everyone who stayed home in 2016, life just got harder for people in this country.

The Trump Regime is desperately looking for a distraction, and this is what they came up with:

In a seismic shift, Attorney General Jeff Sessions will announce Thursday that he is rescinding a trio of memos from the Obama administration that adopted a policy of non-interference with marijuana-friendly state laws, according to a source with knowledge of the decision.

While many states have decriminalized or legalized marijuana use, the drug is still illegal under federal law, creating a conflict between federal and state law.

The main Justice Department memo addressing the issue, known as the "Cole memo" for then-Deputy Attorney General Jim Cole in 2013, set forth new priorities for federal prosecutors operating in states where the drug had been legalized for medical or other adult use. It represented a major shift from strict enforcement to a more hands-off approach, so long as they didn't threaten other federal priorities, such as preventing the distribution of the drug to minors and cartels.

There is no doubt in my mind that the lefty purity trolls who either voted for Trump or stayed home in 2016 are all having a major sad right now because their medical prescription for marijuana is now worthless. Their recreational marijuana use has literally burned up in front of their eyes. For everyone who actually needs this stuff, well, too bad for you. Have fun finding a pot dispensary, which will soon be as rare as a red state abortion provider.

This is yet another example as to how voting (or not voting) will impact a person's life if they refuse to think about the implications of handing all three branches of the Federal Government over to the Republican Party. Does the Department of Justice have any reason to do this to people? No, they don't. There is no social reason for this. There's no science to back it up. In fact, there's science that says that people should have access to marijuana for medical reasons.

The DOJ is making this move because the whole Trump Regime is being pulled down the drain. They are acting because Sessions is old and white and doesn't care about anything other than criminalizing every aspect of American culture that offends him.

Changing this policy hurts a lot of people. Specifically, it hurts every Veteran who treats their PTSD with marijuana. If you separate someone from the treatment they need, you increase the possibility that they will kill themselves or someone else.

So, congratulations, Jill Stein voters. Your naivete about politics has hurt more people than you could ever possibly comprehend. So much for being smarter and better than the rest of us who wanted Hillary Clinton to fight for the rights of the American people.