NAFTA is About to Collapse 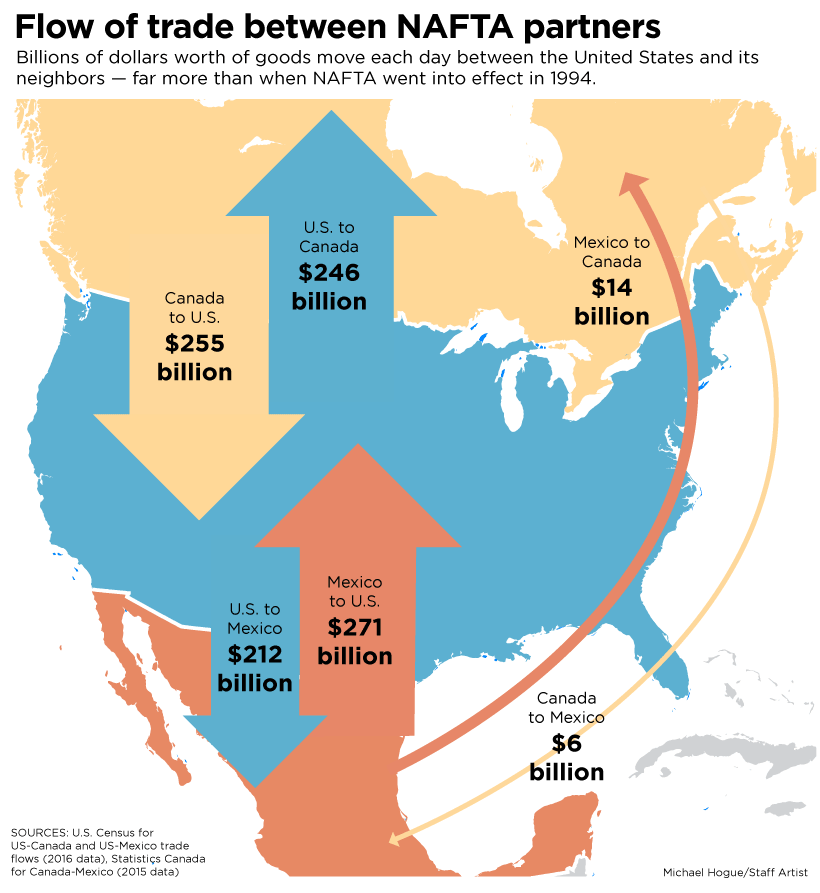 The chart above shows that there is a significant amount of economic activity happening here in North America. This is largely invisible to Americans, but if NAFTA collapses because we have an incompetent government right now, the impact will be felt everywhere:

President Trump could soon kill a major trade deal with Mexico and Canada if huge compromises aren't made this week.

Round 6 of the renegotiation of NAFTA, the pact between Mexico, Canada and the U.S., starts Tuesday in Montreal, Canada.

No major progress has been made on key issues through the first five rounds. Only one more round after this week is scheduled, and Trump continues to repeat his threat that if he doesn't get the deal he wants, he'll withdraw.

"It's going to be the decisive round," says Scott Sinclair, senior fellow at the Canadian Centre for Policy Alternatives.

Trump made NAFTA a core campaign issue. He argues that Mexico is taking jobs and billions of dollars in commerce away from the United States. He also believes a new deal will help the U.S. finance payment for the border wall.

All of this movement back and forth allows the entire North American continent to function like a massive free trade zone that is the envy of the world in terms of how well it has worked since 1994. Money moves back and forth across our northern and southern borders and we could see a massive shift in our overall economic health towards the negative if we allow Trump and his minions to dick around with something that benefits the whole region. This is not a zero sum game. This affects people's lives.

Countless Americans will lose their jobs if trade barriers go up and these deals fall apart. It would be the Trumpiest of Trump moves to let something that works perfectly well die because no one around him can explain why it works as well as it does.

I do not want to see people lose their jobs or end up ruined by the collapse of NAFTA, but I think it is inevitable because of the ideological diarrhea at the top of the Federal government. The only way for the American voter to understand the horrors of Trumpism is to suffer its effects.