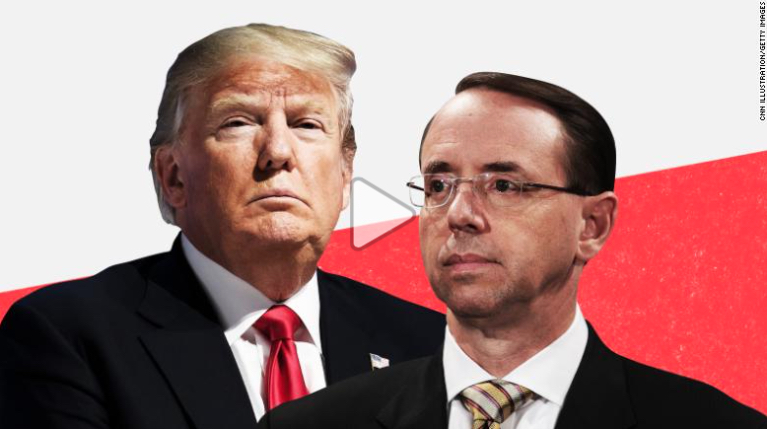 This new fella, I guess his name is Donald Trump, doesn't know what the law is because he keeps breaking it every time I turn around:

But the President had other priorities ahead of a key appearance by Rosenstein on the Hill, according to sources familiar with the meeting. Trump wanted to know where the special counsel's Russia investigation was heading. And he wanted to know whether Rosenstein was "on my team."

The episode is the latest to come to light portraying a President whose inquiries sometimes cross a line that presidents traditionally have tried to avoid when dealing with the Justice Department, for which a measure of independence is key. The exchange could raise further questions about whether Trump was seeking to interfere in the investigation by special counsel Robert Mueller, who is looking into potential collusion by the Trump campaign with Russia and obstruction of justice by the White House.

So, is that obstruction of justice? Asking the Deputy Attorney General if he's "on my team?" Does that meet the criteria? Or is it just another day ending with a "y" in this country? When do we get to the point where someone can finally say, "okay, that's enough."

The whole country is traumatized. Trump is so fucking stupid, he can't help but break the law when he's trying to keep people from realizing that he's been breaking the law since forever. If Trump was a Democrat, he'd have been in jail two years ago. But, because he's a Republican, he can break the law again and again and no one does anything.

This is the time in which we live. Yep, it's crazy! It's as crazy as anything anyone has ever seen.

At some point, the Republican Party is really, really going to need the FBI. And I really think there are Republicans in the FBI that are tearing their hair out right now because they know this, they know that their professionalism has always required that they be non-partisan, but, in this country, you get to be a Democrat or a Republican if you want. You can be neither, of course, and you can follow some other ideology.

For Republicans in the FBI, sorry about all of this. It certainly looks like everything is fucked and you're on the wrong side right now.