Wang Dang Sweet Poon Tang For Thee, Not Me 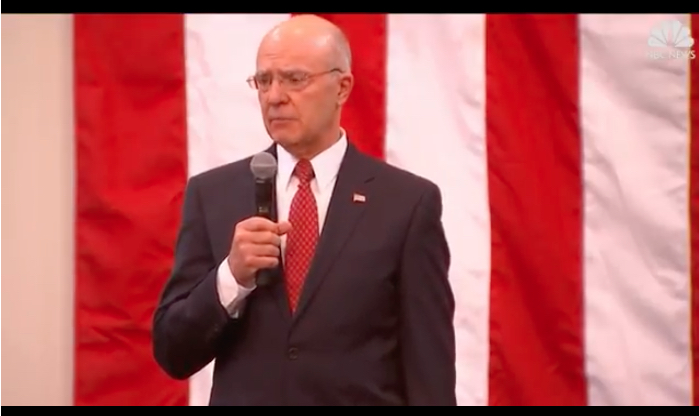 This riveting, blow-by-blow account of how three officers went into what they thought was a "legitimate" club in Vietnam that turned out to be an underage brothel will tell you everything that Ken Burn's video about the war didn't--yes, there were douchebags in uniform and they were anything but heroes.

Okay, here's the thing. In the video, the charismatically-challenged fellow who recites this "tale of woe" is named Bill Sailing.

Bill, thank you for your service.

Now, here's the other thing--what the fuck possessed you to get up in front of a crowd of people, and on behalf of Senate candidate Roy Moore, tell the story of how you, him, and some other officer went into an underage brothel in Vietnam? Why would you tell anyone this story and why would you speak it out loud, and in public? What fucking idiot working for Roy Moore dug you up? Can you imagine that phone call?

"Bill, listen. Can you make up a story about how Roy Moore could have had him some wang dang sweet poon tang back in the Vietnam days? Yeah, we think that will put us over the top. But don't say poon tang because, hell, then we'll have to deal with Ted Nugent showing up and no one wants to open that can of worms. Yes, you can wear a suit. If you don't have one, we'll take you to Sears and get you one."

I'm throwing the bullshit flag on this whole story, by the way, because there are no donkeys, no flaming bottles of cheap liquor, and nobody uses a razor blade to steal their wallets in this story. No live sex shows? No bearded ladies trying to climb inside their rucks? Well, okay then.

There are no Vietnam veterans who are going to believe this story unless they were, literally, the only guys who went over there and, on purpose, didn't get laid. I'm sorry to be crude, and I'm sorry to have to do this, but the overwhelming evidence of what went on during the war contradicts everything Sailing has to say about this. All I'm going to say on that subject is, go read Neil Sheehan's A Bright Shining Lie. Why stop there? Go read this and this. Then, and only then, can you get back to me on this with a rebuttal.

Never mind the fact that you "walked out." Why were you so quick to go to that detail? You shouldn't have walked in, but if you did, then we know that you knew you were going in there for "entertainment" purposes.

If you didn't know what that place was when you walked in, you should have walked out and then you should have never, ever talked about it again. You shouldn't have brought it up, dummy. Because, here's the thing, Mr. Sailing. I know you're a novice at this. I know you're not interested in politics, public relations, common decency, or even common sense. But publicly drawing attention to the primary vulnerability of the candidate you're supporting is just bad politics.

Roy Moore stands credibly accused of being a pedophile. In your public remarks, drawing attention to the fact that Roy Moore was in the presence of underage sex workers in Vietnam is really, really not helping, man. You really should not have called attention to the fact that Roy, who, apparently, likes a taste of the young stuff, had a chance to get a taste of the young stuff in the 'Nam when he was a Military Police corps officer, and that he didn't have him any of that young stuff, by God. This is what you don't bring up in front of a crowd eager to hear good things about the man they blindly support.

If a guy who's running for the Senate stands accused of liking really young and really pretty girls, don't tell a story about how he had a perfect opportunity to get some young and pretty girls. We're supposed to believe you got in a jeep and drove back to base empty handed? Come on, man. You're not fooling us, sir. You're not going to pull the wool over my eyes.

You really should have talked about how you busted guys for getting drunk on duty who were using that magic ditchweed pot and how you broke up fights between sailors and Marines and aw, shit, dude.

You. Just. Shouldn't. Have.