Trump's Lawyers Are Freaking Out 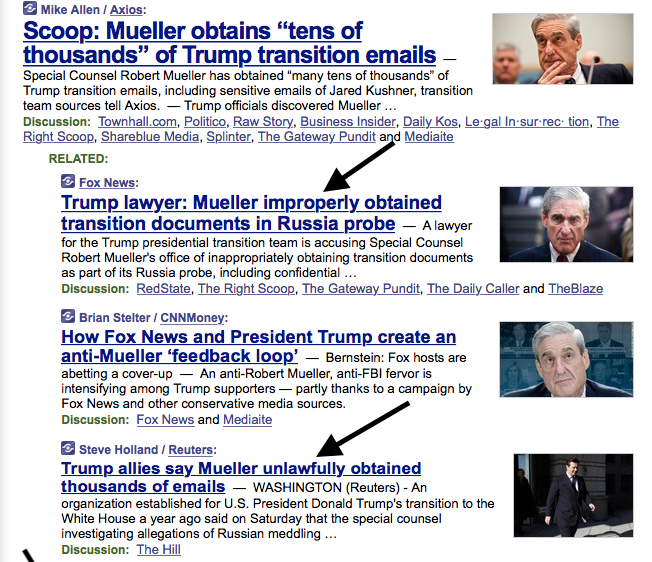 This is how Trump's lawyers are going to "defend" him--they're going to claim that the Special Counsel overstepped his bounds and obtained information from the Trump transition team. This is the pretext that Trump will use to fire Mueller, and their thinking is, "that will end all of this."

Of course, they will fail. 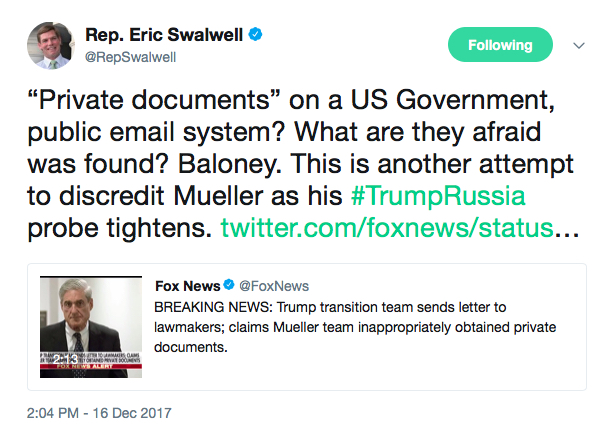 Never mind the fact that it was perfectly okay for the Democratic National Committee's E-mails to end up in the hands of Wikileaks. Never mind the fact that Trump asked the Russians to steal Hillary Clinton's E-mails. Never mind the hypocrisy of it all. No, don't pay any attention to the most glaring aspect of all of this: the Trump people are actually mad that some of their E-mails might be read after winning an election that was all about demanding that they be allowed to read Hillary's E-mails.

This is how the media narrative is shaping up. It's late on Saturday night and the story has started to reverberate through Washington. This narrative centers around how Robert Mueller and his team ended up with a treasure trove of transition documents that Trump's lawyers were planning on "sifting" through in order to only release what they wanted to release to investigators.

I am speculating, but they likely include evidence that will show that Trump, Pence, et al, knew that General Flynn was corrupt and did nothing about it. These E-mails might show other facts, such as open coordination with Russian officials, promises about lifting sanctions, and how they were going to undermine President Barack Obama. I want to emphasize what Axios reporter Mike Allen put in his story. NO ONE WAS SUPPOSED TO SEE THESE E-MAILS. Instead, Mueller ended up with everything because that's how this works, baby.

If you use a government computer, never EVER expect your communications to be private.

Imagine the setting. Trump's people go and sit down for interviews with the Special Counsel and his team. They ask a lot of questions. They press for details. But, what Trump's people don't know is that Mueller has all of their E-mails. All they have to do is tell the truth, and they're okay.

What do you want to bet on that? Would you bet that someone working for Trump would actually tell the truth?

Now, note the emphasis on the words "improperly" and "unlawfully" in two frantic stories that were created after Allen was given the original scoop. This is a ridiculous gambit for any number of reasons.

Do you really think that Mueller would tolerate anything "improper" or "unlawful" in any way, shape or form? That's what doesn't make sense here. Mueller has two indictments and two guilty pleas that have yielded him a pair of singing canaries. There are no leaks from his organization. They are conducting one of the most professional and thorough counterintelligence operations in American history.

Do you really think there wasn't a solid basis for obtaining that information? Do you really think there weren't already warrants in place and a justification ready for anyone who might want to know? If, for some unprecedented reason, Mueller's team really did blunder here, it would be completely out of character. Mueller's legal team has been detail-oriented and cautious up to this point. The don't leak, and they don't do thinks like this.

Contrast this with a legal team that can't seem to do anything right. And with a president who goes out and commits obstruction of justice on a regular basis because he can't control his emotions or his tweets. Mix in a bumbler like Donald Junior and what do you have? The most corrupt and fraudulent regime we have ever seen.

I want you to remember this phrase:

Trump's people did business the way they have always done business. They did this business on a computer system maintained by the Federal Government. They had no idea what they were doing, and that's where we are right now. The realization of what they did has hit them.

Hold on--the ride's about to get bumpy.