Trump: Haitians All Have AIDS 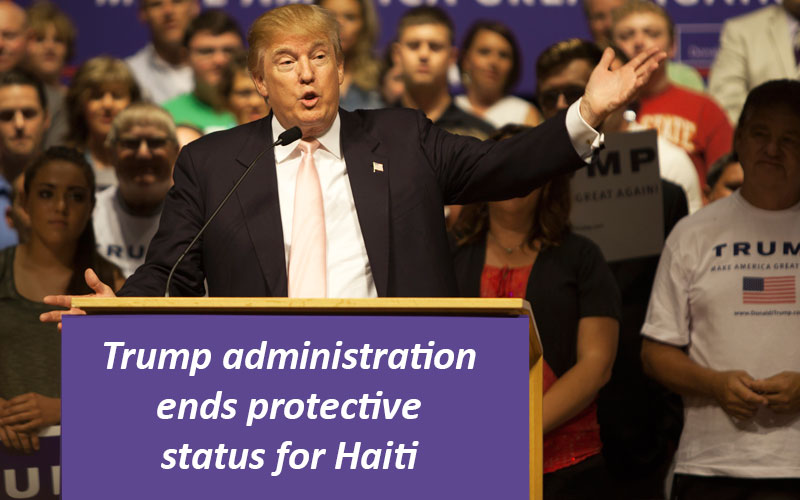 What racist jerkwad would say something this awful?

The White House strongly pushed back on a report that President Donald Trump spoke about immigrants in a dismissive and demeaning fashion during a June meeting with top administration officials.

The denial came in response to explosive reporting from the New York Times, which wrote that, according to two unnamed officials, Trump said during a meeting in June that people coming from Haiti "all have AIDS," that recent Nigerian immigrants would never "go back to their huts" in Africa and that Afghanistan is a terrorist haven.

White House press secretary Sarah Sanders issued a statement blasting the paper and denying that Trump had made the comments.

"General Kelly, General McMaster, Secretary Tillerson, Secretary Nielsen, and all other senior staff actually in the meeting deny these outrageous claims and it's both sad and telling the New York Times would print the lies of their anonymous 'sources' anyway," Sanders said.

The report said the Oval Office meeting during the summer included Secretary of State Rex Tillerson, then-Homeland Security Secretary John Kelly and senior officials, including White House adviser Stephen Miller, who the Times said had provided Trump with a list of how many immigrants received visas to enter the United States in 2017.

In this middle of the junta listed above, we find the name H.R. McMaster. He was the author of a book that went into scholarly detail about how the uniformed military officers serving during the Johnson Administration failed to tell the truth about Vietnam to the president. He said they were "derelict" in their duty to speak truth to power about American foreign policy.

Well, the ball is in your court, General McMaster. This blanket denial of what was said isn't going to cut it. Admit that Trump said that people from Haiti "all have AIDS" and that Nigerians would never "go back to their huts."

Admit it, or admit you are complicit in another crime against history. And if you won't do it, then let Generals Mattis and Kelly feel the shame of knowing that they are no longer men of honor. Hell, all three of them have bent the knee so much that, by this point, what are their oaths and promises even worth anymore?

Trump is a racist and an outright white supremacist, and today we even get a little homophobia thrown in as a bonus. Everything he has ever said on the subject of race in America backs up the bigotry of his alleged remarks. Anyone who covers for him is just as guilty as he is. No one expects a Stephen Miller to be a decent human being. He is just another weasel who has survived another day of horror and chaos. You'd think three men who have been raised to the rank of general would have some dignity left. You would be wrong.