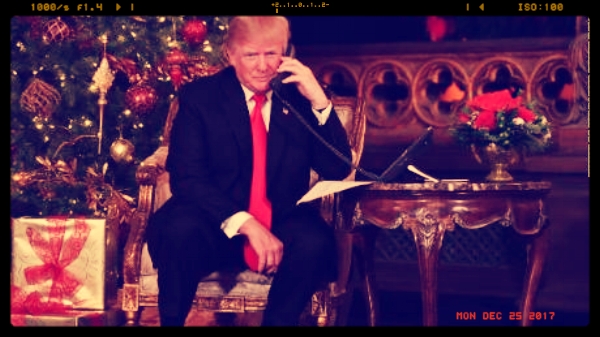 Trump phones it in, as usual, while sitting on his fat ass, doing nothing:

All was not calm and bright on President Donald Trump's Twitter feed this Christmas.

Trump, marking his first Christmas as President from his private club here, balanced the traditional presidential holiday tasks -- teleconferencing with the troops, speaking with young kids looking for Santa Claus and attending a late-night church service -- with the fire-breathing tweets that helped turn him from boisterous businessman to an unconventional commander in chief.

It was a characteristic end to an often tumultuous year, where the President regularly found himself exactly where he wanted to be: at the center of attention.

Trump celebrated the holiday with his family around him at Mar-a-Lago, the private estate that Trump has warmed to calling the "Winter White House." Joined by most of his children and grandchildren, along with first lady Melania Trump and her parents, the Trump brood sat at the center of the club's dining room on Sunday night, kept at arm's length with rope-and-stanchion around their tables.

Feasting on turkey, beef tenderloin and creamy kale, Trump was said to be in good spirits and surrounded by the friends and informal advisers that make up the group of men and women who help steer the President from outside the White House.

I don't remember him campaigning on a promise to make his $200,000 a year country club the 'Winter White House,' but okay. And what kind of a weirdo eats with his family surrounded by a rope-and-stanchion security fence? How is that Christmasy at all?

How is "teleconferencing with the troops" not enough to make you want to throw up? If you're too lazy to go to where the troops are, don't bother them with a phone call. Trump can't even talk to them standing up.

This is a do-nothing president whose sole purpose is to say horrible things about people. He won't lift a finger for anyone but himself. Every single thing he does is for the benefit of his companies and the people who gave him money to run for President. The people who waited on him and his family today are barely making a living wage. The fact that this isn't a huge issue--a self-dealing president vacations on his own property, forcing the government to spend millions to protect him while he charges them back for petty expenses--shows you where we are today.

Every time President Obama went to Hawaii, the right wing cringed and howled in outrage. Welcome to Trump's latest trip to Mar-a-Lago. Might as well give up pointing out the hypocrisy, right?