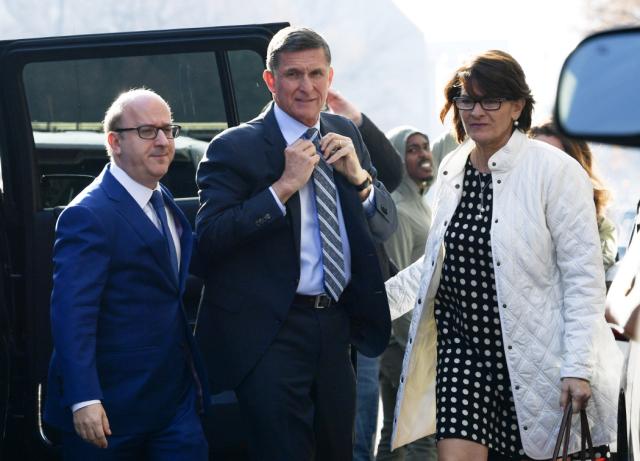 Michael Flynn should be stripped of his status as a retired officer. He should lose every benefit he earned while in service to his country. Nothing for his family, nothing more than what is granted to those who earn a bad conduct discharge from the military. He should never, ever again be referred to as a "retired Lieutenant General" nor should he be considered anything other than a traitor to this country.

Instead, he gets a sweet deal for flipping on Jared Kushner:

President Trump’s former national security adviser, Michael Flynn, pleaded guilty on Friday morning to a charge of making false statements to the FBI. Flynn also indicated he plans to cooperate with special counsel Robert Mueller’s investigation into alleged Russian interference in the 2016 U.S. presidential election. Mueller filed the charges against Flynn on Thursday in a three-paragraph “information” that leaves many questions about Flynn’s activities unanswered.

Flynn, a retired general, could face up to five years in prison. He is the fourth figure from Trump’s presidential campaign to face charges, and there are indications that he may be cooperating with prosecutors in the broader Russia probe.

In a statement released by his attorney’s office shortly after he made the plea, Flynn claimed he has faced “false accusations” of “treason.” However, he also acknowledged that the actions he pleaded guilty to were “wrong” and indicated that his guilty plea was part of an “agreement to cooperate with the Special Counsel’s Office.”

“After over 33 years of military service to our country, including nearly five years in combat away from my family, and then my decision to continue to serve the United States, it has been extraordinarily painful to endure these many months of false accusations of ‘treason’ and other outrageous acts. Such false accusations are contrary to everything I have ever done and stood for. But I recognize that the actions I acknowledged in court today were wrong, and, through my faith in God, I am working to set things right,” said Flynn.

It would appear to me that Robert Mueller's team sat him down and spoke quietly with not only Flynn but with whatever constitutes a lawyer these days and laid out how many decades in Leavenworth he was looking at. There are five men on death row there, and I think that may have come up in conversation. How would you like to be the one having to hear that from a hand-picked lawyer working for the man systematically dismantling the Trump regime?

Here is why Michael Flynn is a traitor.

The act of using the assistance of a foreign government to seize the presidency with fraudulent acts is the very definition of making war against the United States of America. We're not talking about stuffing a ballot box to win a seat on the town council. We're talking about collusion with a hostile foreign power in order to take complete control over the military. If you could ask 100 Founding Fathers of this country if using old Mother Russia's assistance in order to cheat your opponent out of being president constituted "treason," I would think the answer would be an emphatic yes.

Trump's illegal seizure of the presidency was aided by Russia, and this constituted an act of war upon America itself. He, and everyone who assisted in that effort, is guilty of treason.