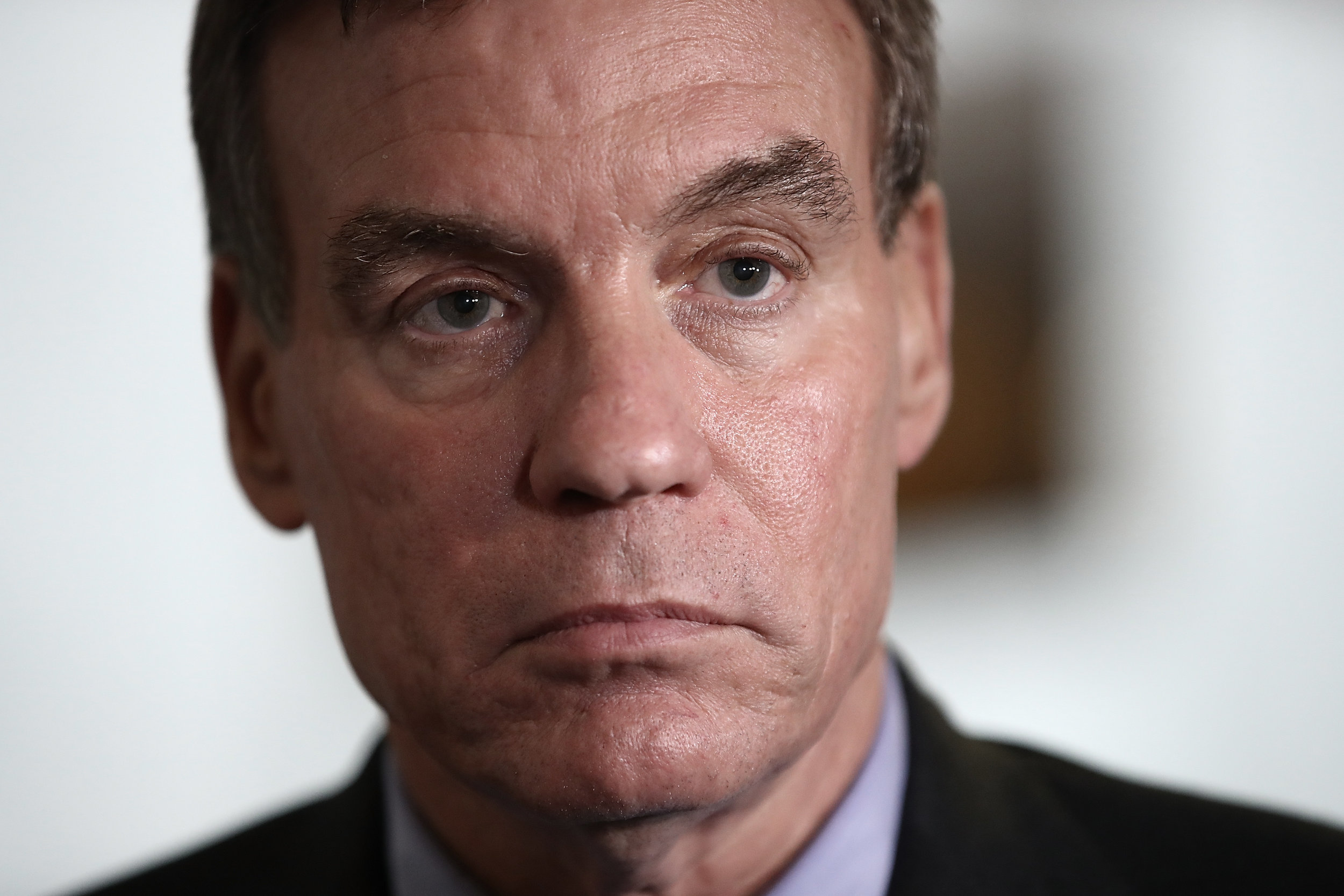 The conventional wisdom probably says that Senator Mark Warner was speaking to Trump this afternoon when he spoke about the rule of law and preserving the sanctity of a government investigation. I happen to think that what he says here is more or less a direct threat to the incompetent boobs who have to flatter the president every time he stumbles into view:

Sen. Mark Warner, the top Democrat on the Senate Intelligence Committee, said Wednesday that the firing of Justice Department special counsel Robert Mueller would be a "gross abuse of power" and called for Congress to respond with "significant consequences" if President Donald Trump took that step.

Warner, a Virginia Democrat, took to the Senate floor for a speech, in which, he said the firing of Mueller or the pardoning of those charged in the special counsel's investigation would represent crossing his "red line."

"Any attempt by this President to remove special counsel Mueller from his position or to pardon key witnesses in any effort to shield them from accountability or shut down the investigation would be a gross abuse of power and a flagrant violation of executive branch responsibilities and authorities," Warner said. "These truly are red lines and simply cannot allow them to be crossed."

"Congress must make clear to the President that firing the special counsel or interfering with his investigation by issuing pardons of essential witnesses is unacceptable and would have immediate and significant consequences," he added.

Never draw a red line unless you're willing to actually do something when it is crossed and never underestimate the ability of someone like Robert Mueller to plan for his own firing. If Mueller is fired, so what? If his entire team is fired, the reaction should be "how could Trump be this stupid?"

Warner's shot was directed at the people around him--the junta of Kelly, Mattis and McMaster. If Trump pulls the switch on this, Warner is telling these men that they will be guilty as sin of tolerating "executive bank responsibilities and authorities" of the sort that will land them in prison when properly investigated by a Democratically-controlled Congress that understands the role of oversight and compliance.

Let Trump burn, or all of you will burn. Warner should have just said that and walked away from the podium.

The intelligence community has all of the information on Trump that is needed for impeachment. Mueller is the person tasked with taking everything and tying it to a prosecutorial strategy. On day one, he probably sat everyone down and talked them through a process that would kick in if he were to be gotten rid of like James Comey was. If the prosecutor is fired, the evidence remains. That evidence is backed up and triple-copied and isn't going anywhere. Let Trump fire Mueller after Mueller--it only obstructs justice and makes him look guilty. It buys him a little time, but, once these holidays are over, we enter the most critical political year of all--the year where Trumpism can be defeated and rolled back.

I suspect that Warner already knows that Trump will fire Rosenstein and then whoever refuses to fire Mueller. Trump is inherently stupid, impulsive, and cannot stick to a plan or strategy. Someone somewhere is scuffling with old orange meat bag Trump right now, trying to keep him away from the telephone. Shouts of "I'll show him," are ringing through the halls.

Firing Mueller is a foregone conclusion. Trump understands one thing--remove all existential threats. He has the dictator's mindset for self-preservation. When Mueller goes, the contingency plan will kick in and Trump will be made to look like the Russian asset that he is (thank you, James Clapper, for your shot across the bow). Americans will either cheer or howl with outrage. The subject will be Trump, and Trump will see his image everywhere.

When is anyone going to realize that we will not be rid of this man until we elect a new Congress and throw him out of office? Mueller isn't going to save us--the American voter is the only remedy for Trumpism. If allowed to do so, Mueller will do a thorough, professional job that half of this country won't accept anyway. He's just lining up the paperwork that Trump refuses to sign.

The best president of my lifetime said it best: "Don't boo, vote."