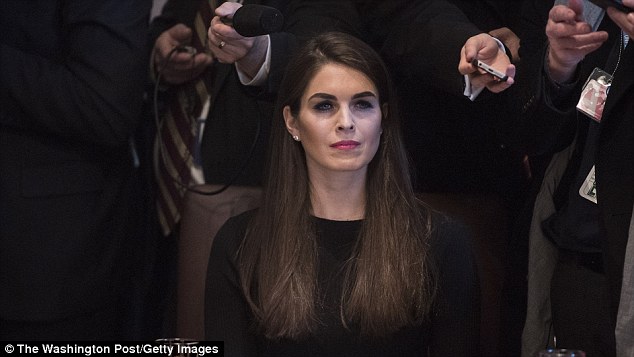 Repeated efforts by Russians to contact Hope Hicks, one of President Trump's closest advisors, led FBI agents to meet with her in the White House to warn her off, according to a new report.

Hicks, 29, was the recipient of repeated efforts by Russians to contact her during the presidential transition, the New York Times reported.

The efforts set off alarm bells among intelligence and law enforcement officials, following the multi-agency conclusion that Russia interfered in the presidential election.

Once President Trump took office, counterintelligence officials met with Hicks in the secure White House Situation Room 'at least twice,' according to the report, to warn her that the Russians who contacted her by email were not who they claimed to be.

To say that she is ridiculously unqualified for her job is an insult to all of the other hopelessly incompetent people around Trump. This is, by the way, the future ex-Mrs. Donald Trump and, for all intents and purposes, there's no point in analyzing anything this woman has done.

They are all traitors to this country. They are up to their necks in dealings with every Russian agent that Putin sent at them. Our country is less safe and mocked endlessly because people like this are actually working inside of the White House.