Here's What the Bush Tax Cuts Did to America 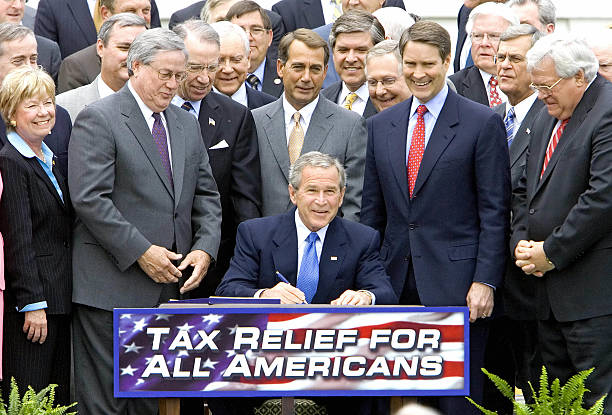 As much as I want to laugh at any picture that has Dennis Hastert in it, this post is really about the Bush Tax cuts and what they did to the American economy. Somehow, it seems appropriate to talk about what really happened with we cut taxes in this country in the early 2000s.

Policymakers enacted the 2001 and 2003 tax cuts with the promise that they would “pay for themselves” by delivering increased economic growth, which would generate higher tax revenues.[11]  But even President Bush’s Treasury Department estimated that under the most optimistic scenario, the tax cuts would at best pay for less than 10 percent of their long-term cost with increased growth.[12]

Evidence suggests that the tax cuts — particularly those for high-income households — did not improve economic growth or pay for themselves, but instead ballooned deficits and debt and contributed to a rise in income inequality.[13]

In fact, the economic expansion that lasted from 2001 to 2007 was weaker than average.  A review of economic evidence on the tax cuts by Brookings Institution economist William Gale and Dartmouth professor Andrew Samwick, former chief economist on George W. Bush’s Council of Economic Advisers, found that “a cursory look at growth between 2001 and 2007 (before the onset of the Great Recession) suggests that overall growth rate was … mediocre” and that “there is, in short, no first-order evidence in the aggregate data that these tax cuts generated growth.”[14]

In comparison, the economic expansion of the early 1990s — which followed considerable tax increases — produced a much faster rate of job growth and somewhat faster GDP growth than the expansion of the early 2000s.[15]  An analysis of business activity between 1996 and 2008 found that even the sharp cut in dividend tax rates in 2003, which proponents claimed would spur immediate business growth, had no significant impact on business investment or employee compensation after 2003.[16]

That's the long an short of it. The Bush tax cuts did not pay for themselves. America's crippling needs went begging for relief.

You can blame income inequality, our massive debt, and the near-collapse of the economy in 2008 squarely on the Bush tax cuts. By handing the top one percent all that extra cash, they turned Wall Street into a casino and nearly took down Western civilization. By handing them massive tax cuts, they pocketed their winnings and didn't create jobs or growth. By ignoring our infrastructure and our health care needs, we doomed untold numbers of Americans to a decade of misery until Obamacare eased their burdens.

We now stand on the precipice of another completely stupid fucking act, and Trump is president. Compared to Trump, Bush looks like an actual president, doesn't he? And that's the answer to today's big question. How fucked are we? We are temporarily fucked until we can get rid of Trump and his regime. And, somehow, Trump makes the craven insanity and greed of the Bush years look quaint.