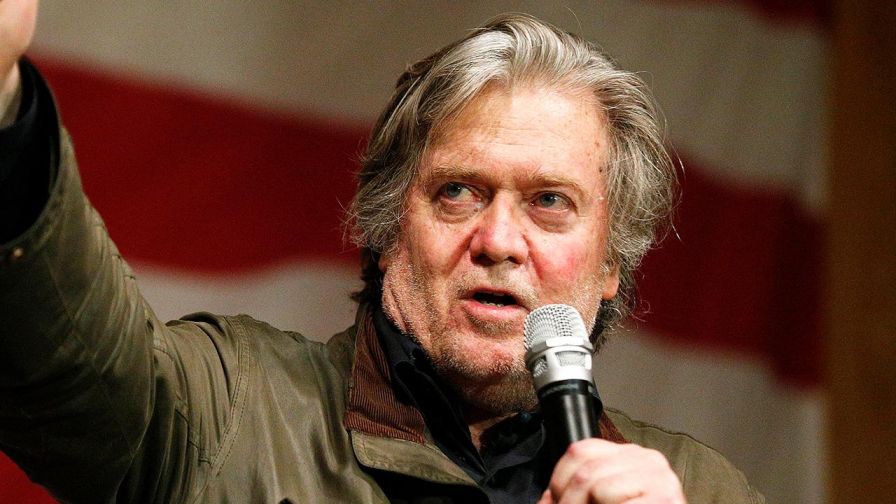 Steve Bannon is here to say some things:

In October, Bannon called an adviser and said he would consider running for president if Trump doesn’t run for re-election in 2020. Which Bannon has told people is a realistic possibility. In private conversations since leaving the White House, Bannon said Trump only has a 30 percent chance of serving out his term, whether he’s impeached or removed by the Cabinet invoking the 25th amendment. That prospect seemed to become more likely in early December when special counsel Robert Mueller secured a plea deal from former national security adviser Michael Flynn. Bannon has also remarked on the toll the office has taken on Trump, telling advisers his former boss has “lost a step.” “He’s like an 11-year-old child,” Bannon joked to a friend in November.

This made me laugh. Political genius, indeed:

Bannon huddled over his BlackBerry firing off e-mails to Breitbart reporters he’d dispatched to Alabama to discredit the Post story. “I got my two best guys down there,” he said while waiting for Moore campaign chairman Bill Armistead to call. Bannon’s orders: deny, deny, deny. “One of the things I realized during the campaign is that, like in the military, it all comes down to one or two decisions in the heat of battle,” he said. “You have to double down.” In Moore, he knew he had a less capable candidate. (His first choice had been Alabama congressman Mo Brooks.) “I’m gonna tell Judge Moore to do his thing,” Bannon said. “They’re not cut out for this, though.”

Who still has a BlackBerry? Jeeeeeezus. And I've heard of this Roy Moore fellow. Wasn't he the pedophile who couldn't win as a Republican in Alabama? Clearly, his "two best guys" didn't really accomplish much and doubling down didn't yield the results he wanted to see.

The article goes on to demonstrate that Bannon is here to show people that he isn't afraid to be unloved:

Not surprisingly, the idea of Bannon as a political figure, let alone a presidential candidate, inspires ridicule and venom from the Republican establishment. The Wall Street Journal editorial page called Bannon’s roster of candidates a bunch of “cranks and outliers.” Former McConnell chief of staff Josh Holmes said Bannon is a “white supremacist.” Stuart Stevens, a veteran of five Republican presidential campaigns, told me that Bannon is “an odd, strangely repulsive figure who is trying to use the political process to work through personal issues of anger and frustration.” He added, “like many people in their first campaign, he confused his candidate winning with the fantasy voters supported him.”

A prominent Republican described Bannon’s crusade as a vanity exercise doomed to fail. “I think there was a lot of rage when he was in the White House,” the Republican said. “Steve had to subsume his ego to Donald, who Steve thinks is dumb and crazy. With Steve, it’s not about building new things—it’s about destroying the old. I’m not sure he knows what he wants.” As evidence, he pointed out the recent Virginia governor’s race, where Republican Ed Gillespie got crushed by nine points running on a Bannon-esque platform defending Confederate monuments and inciting fear over illegal immigrant crime. “The issues didn’t just fail, they failed miserably,” the Republican said.

Bannon’s response to all this criticism is a variation on his personal motto: Honey badger don’t give a shit. “I don’t give a fuck,” he told me when I visited him one morning at the Bryant Park Hotel. “You can call me anything you want. Do you think I give a shit? I literally don’t care.”

Clearly, he does care. Otherwise, why would he go out of his way to tell someone that in public? If you really don't care, you don't make it the centerpiece of every conversation you have on-the-record with the working media.

How did we let a man like this get to where he was? How does a white supremacist get to work in the White House in the first place? Yeah, Bannon is gone, but he still has Trump's ear. They're all sickening freaks and they're all traitors to the very idea of America. Hell, Bannon isn't even fit to compare to a hobo.

At least with hobos, there's an ethos, right?