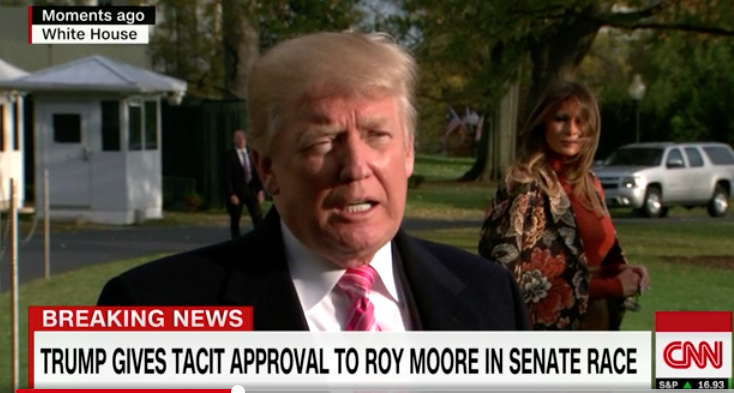 When it comes to child molesting Senate candidates, Trump is okay with them as long as they deny they did anything wrong:

President Donald Trump on Tuesday defended embattled Alabama Republican Roy Moore, all but endorsing the Senate candidate who has been accused of sexual assault.

"He denies it. Look, he denies it," Trump said of Moore. "If you look at all the things that have happened over the last 48 hours. He totally denies it. He says it didn't happen. And look, you have to look at him also."

Several women have come forward and accused Moore of pursuing romantic relationships with them when they were teenagers and he was in his 30s, and several others also have accused him of assault.

If you take a knee before a football game, you're a son of a bitch. If you molest some kids, you're okay by Trump as long as you deny it. That's the new standard now. This is how American democracy works, and there's nothing you can do about it because Trump believes Roy Moore.

There are, literally, no standards anymore when it comes to public life.