Trump is Now Responsible for the War on Terror 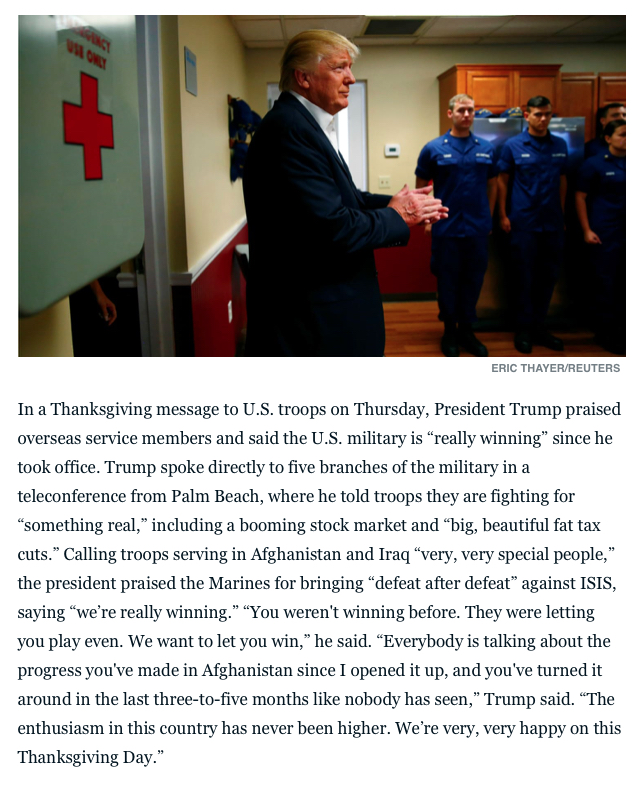 This is a very, very important development in the war on terror, if only because Trump has now taken ownership of the strategy and the outcome by talking about how the military is "really winning."

Disloyal and dishonest generals like McMaster and Kelly and Mattis can no longer scapegoat Obama's national security team. They have been given free rein to wage war with minimal civilian control of the military. This has led to indiscriminate bombing and a foolish escalation of the war on terror into Syria, Yemen, Iraq, and Afghanistan. We should not have any footprint in Africa. We are ignoring Venezuela and the wars of the Mexican drug cartels. We have no business abandoning our NATO commitments. I wish Obama had told the generals in 2009 that their war was over and I wish he had brought the troops and the drones home for good.

Ongoing operational successes do not add up to victory; in Afghanistan, in particular, this is no "winning" because controlling territory is a seasonal reality. The Taliban have a near-permanent foothold in the areas it is interested in controlling. They can launch attacks into other areas whenever they want. There is an Afghan government only because the U.S. military is still in the country propping them up. If we were to remove our forces, the Taliban would fight the government until it won what it wanted to win. To say that Afghanistan has been "turned around" in three to five months without understanding what that means indicates that someone has been blowing a massive amount of sunshine up Trump's ample rear end.

The Syrians and the Russians are fighting ISIS, too. Does anyone really think Assad does not have total control over enough of his country to hold on to power indefinitely? The only person missing from Assad's embrace of Putin is Trump. If that's winning, then what the hell does defeat look like?

When we hit late January of 2018, the full effect of a year of Trumpism will be evident. Blaming Obama for not letting the troops "win" reminds me of that line in the old Rambo sequel.

Trump makes his own reality and lives out his own myths. Meanwhile, Americans are dying and if there's an overall strategy that doesn't involve doing whatever it takes to flatter Trump, I have no idea what it is.