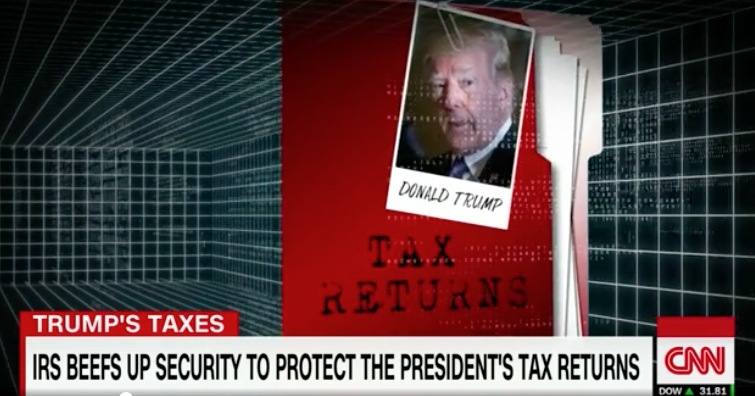 I think that, from now on, the FBI should see the tax returns of everyone who runs for President, no exceptions.

This is a bullshit story on the efforts undertaken by the Internal Revenue Service to spend good money on a super-secret vault to protect the tax returns of the various VIPs who enter their system. Really, it's meaningless--who is going to use that information to harm a president or a former president? They are protected by numerous laws already. Anyone who tries will be subjected to intense legal pressure and there's nothing wrong with that. We accept that a president will be protected from harm if someone tries to take advantage of them. But their tax returns are no more important than yours or mine. The IRS should work on behalf of all Americans and it should understand that transparency is in the public's interest.

Enhancing the agency's security is really a head fake. It's not to keep anyone out. It's to keep those who are "in" the agency from leaking Trump's returns. Someone somewhere has a strategy at work here. The returns will be presented when someone like, I don't know, perhaps Robert Mueller goes to a Grand Jury and indicts the president. That's what I think is probably going on right now. A court order has already released Trump's full returns, probably going back forty years, to someone working for Mueller. Talk about a fun read.

All Americans should care about this because, once Trump got away with it, he made it so no one has to release their returns ever again (unless they're a Democrat). What is important is being able to see who pays the president and how much they are making. We have now virtually normalized the idea that a president should not be subjected to even the most basic forms of public disclosure when it comes to financial ethics. Wading through the paperwork that Trump's campaign filed was like a goldmine of insanity--they had to return millions of dollars in contributions because people tried to give him too much cash.

Here's what I'll guarantee you--this won't be an issue until someone wealthy who makes the mistake of self-identifying as a Democrat runs for president. Then, and only then, will the tax returns be an issue. You'll see a parade of Republican members of Congress screaming for those returns. It will look like a late Sunday afternoon at the buffet line when they run out of lobster tails and charred steak. Nothing makes old, white men howl like an empty tray under a sneeze guard after they've paid their seven bucks.

If a presidential candidate won't release their tax returns, neither party should nominate them. If they run and win the presidency, the Congress should vote immediately to make their tax returns available for review. At a bare minimum, the FBI should review the returns and ensure that the president is not dependent on foreign money.

Of all of the ridiculous things we have endured over the past year, this one takes the cake for me. Of course we need to see Trump's tax returns. We should have seen them before Christmas of 2015.

Think of the horrors we could have avoided.