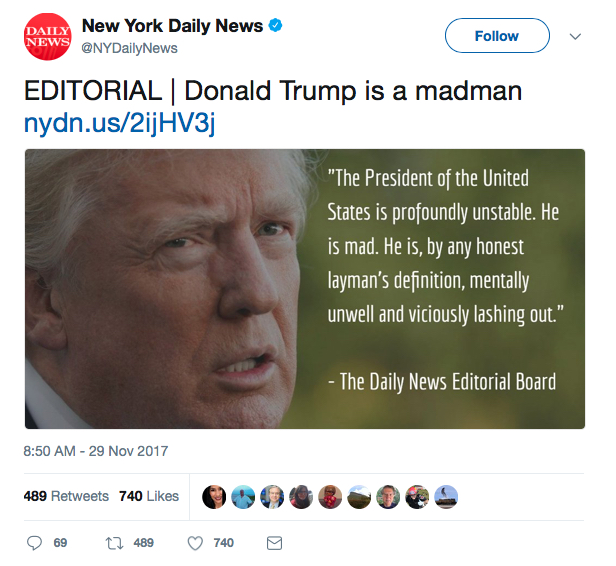 The New York Daily News has undertaken a new and spectacular effort that is designed to ensure that no one from the paper is invited to the White House for the annual Christmas party.  I believe this will work, but I remain skeptical.

There are probably some employees at the paper who are miffed that the editorial page has gone about this the wrong way. If invited, you politely decline by stating, "I'm sorry, I have other plans and they are more important to me." Then you arrange to have yourself photographed entering a laundromat with your roommate's dirty unmentionables in an overstuffed duffel bag with an Adidas logo on the side. "These things happen, and I'm just trying to help out because I had nothing better to do."

Other employees at the paper are savvy enough to know that the knuckle-dragging shitheels who serve Trump are probably going to be in the back licking all the finger food that will be laid out on the tables. The people working for Trump who aren't in the civil service look like the "spit on your burger" type. Who wants conjunctivitis or a viral infection from one of these pricks?

No, no one wants to go to the Christmas party.

I know it is very popular to scream profanity into the wind and extend both barrels of a middle-finger salute when the subject of Trump comes up. That's a version that makes people stare at you for a moment and hurry around the fracas. Not everyone is obsessed with politics. I don't know any of those people, either.

I would submit that, when the date was, oh, say, Summer of 2015, it was pretty much in evidence that Trump was a madman. I haven't seen anything happen in the last year that I wasn't aware of before this man was elected president. I saw enough in the previous two decades to know he was a charlatan and a fraud. I'm proud to say I never liked him, not one bit, and I've never watched his show. He has always represented charmless wealth to me. Who needs it?

Congratulations, New York Daily News. You can count yourselves among the lucky disinvited.