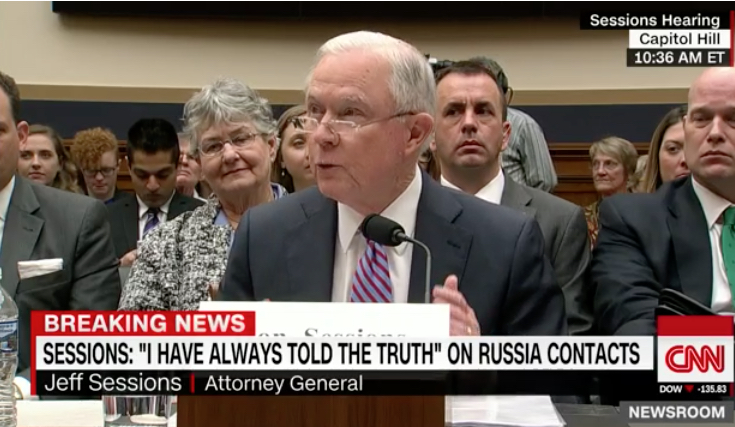 It certainly seems like we will have a new Attorney General before the year is out, doesn't it?

Sessions said although his Justice Department will consider investigations into Hillary Clinton, he could not say whether he would recuse himself from the matter, contradicting his previous statements on the matter. He said there was not yet enough evidence of impropriety to merit assigning a new special counsel.

"'Looks like' is not enough basis to appoint a special counsel," the attorney general said.

Sessions also testified that he now remembers a meeting with Trump campaign aide George Papadopoulos, whose work is now a focus of Robert Mueller's special counsel investigation into Russian election meddling, but denied having a clear memory of the full conversation.

Watch what the Mueller team does in the days ahead. They will parse the testimony Sessions delivered today and they will start laying down the appropriate cards in response. Another shock indictment, perhaps? More details about what Papadopoulos said to keep himself out of prison, I would imagine. By the time Rachel Maddow comes on tonight, I'd be willing to bet you someone somewhere leaks proof that Sessions perjured himself yet again.

The GOP led House is a boiling mass of horror right now, and everyone is wondering when they can announce their retirement. No one wants to face a howling mob in the primaries.

The Trump campaign was up to its eyeballs in contacts with the Russians because they're the ones who had the information that would give Trump a viable path to victory. They could have run a clean campaign, but Trump has never done anything clean in his life. They wanted to seize power in America and that's exactly what they did. Trump is the head of a crime syndicate that will have to be broken into pieces, vaporized, and broken down even further.

They didn't "win" the presidency. They seized it.

When someone says, "this wasn't treason!" you can point out to them that when Americans hostile to the Constitution and our laws act to collude with a foreign government to seize the presidency through acts of fraud, they are making "war" on the United States. Russian interference in our election was an act of cyberwar, and any American who acted in concert with this effort was giving aid and comfort to the enemy and providing them a means to secure a victory against the United States.

It's that simple, it really is. They are all traitors, and they will all perish while in custody. Sessions is looking for a way to step down or get fired that will leave him able to grab at some sort of immunity. Mike Pence may have beaten him to it, but only in his own mind. Never forget that the most crooked Attorney General in modern American History has his own criminal defense attorney because that's the way we roll now. Deviancy is normalized and criminals hold power in American.