Alex Ovechkin Loves Vladimir Putin a Little Too Much 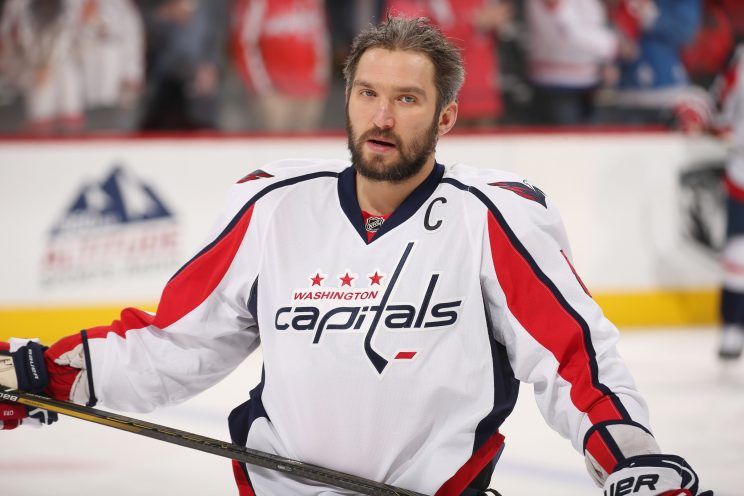 Washington Capitals franchise superstar Alex Ovechkin has decided that his love of Vladimir Putin is going to reveal itself this season in ways that the team's front office probably isn't happy about:

Washington Capitals captain Alex Ovechkin has long supported Russian President Vladimir Putin on social media, but Thursday afternoon, he took it a step further with an Instagram post, announcing the creation of a social movement in support of Putin that he’s labeling the Putin Team.

“Personal achievements and medals – all of this great, but in hockey, like with everything, to win it’s important to have a team. Only a team is capable of changing the course of a game, achieve the impossible,” Ovechkin said in the post, which was translated by The Washington Post. “Lately, in the Western Press, I’m noticing a comparison to Putin’s team. And you know, I really liked that comparison. Personally, I’m ready to be a member of that team. I never hid my relationship with our president, always openly supported him.”

Ovechkin continued: “I’m certain that there are many of us that support Vladimir Putin. Let’s unite and show everyone a strong and united Russia. Today, I want to announce a social movement in the name of Putin Team. Be a part of this team – to me it’s a privilege, it’s like the feeling of when you put on the jersey of the Russian team, knowing that the whole country is rooting for you.”

After the Capitals’ 4-3 win over the New York Islanders on Thursday night, Ovechkin explained why he decided on this public show of support for Putin.

“I just support my country, you know?” Ovechkin said. “That’s where I’m from, my parents live there, all my friends. Like every human from different countries, they support their president.”

In other words, "I support Vladimir Putin, but please don't be bring up the fact that he is a murderous kleptocrat who rules Russia with an iron fist."

Ovechkin can't be forgiven for this. Someone will try to wave this away as a free speech issue. But that's not the issue here. No one is denying that Ovechkin can be an open and proud supporter of Putin. What cannot be ignored is that this is a public relations disaster in the making. Does the franchise agree with Ovechkin? What about his teammates?  The Capitals were already in a huge bind because in a few short months, Ovechkin will abandon them in mid-season to go play for the Russian national team.

Let's be honest here. He's not naive. He's a multi-millionaire who has played in the NHL since 2005. He loves Putin, and he plays for the team in our nation's capital, which has been rocked for the last year by revelations that the Trump regime used Russian assistance to steal the presidency from Hillary Clinton.

This is a bridge too far. If you're working in a public relations position for the Capitals, you have to be mainlining antacids and praying that Ovechkin decides to abandon politics, stick his head down, and help the team get back to the playoffs. Did he run this by the coaches and the General Manager and the owner of the team? I'm thinking that the person who was supposed to sign off on this probably wasn't paying attention to either what Ovechkin and his interpreter were telling them or to any news anywhere in the United States.

The problem is, how do you keep a player like this on your roster? How do you handle the fallout when the fans decide that they don't want to cheer for this guy anymore? Ovechkin can endorse Putin, but the fans can vote with their feet. And if your stands are full of Pro-Putin demonstrators, you have an entirely new and difficult problem. This will reach out beyond hockey and end up being a career-ending decision for someone.

I mean, how do you sign an endorsement deal with this guy now? How do you ask him to make an appearance on behalf of a local charity? I have to believe that all o that is done.

Ovechkin's admiration for Putin is sickening. Putin has the blood of so many innocent people on his hands that I don't think hell could swallow him up fast enough. He's the killer of journalists and civilians and non-combatants that The Hague was supposed to solve and has failed to do so. Putin's rise is as much an American problem as it is a failure of the whole world to enforce some kind of standard when it comes to Russia.

I guess he can count on Trump's support, right? I expect Ovechkin will be showered with Trumpian praise soon. Here you have a player that is both a Hall of Famer and a complete and utter disaster, all at once. The window is closing on the team's chance to win a Stanley Cup with Ovechkin. In some respects, this is a year that they can't afford to lose. And yet, it would appear that Ovie has already decided to thrown his support to Team Putin.