The Phony Patriotism of Mike Pence 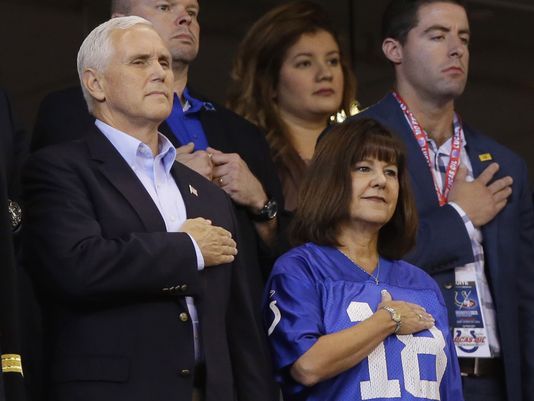 The Trump Regime can't even stage their phony outrage without being called on it:

North Korea and its nukes can wait. The White House has declared war on the NFL. And on the First Amendment.

Two weeks after President Trump decreed that NFL players who kneel during the national anthem should be fired, Vice President Mike Pence walked out of Lucas Oil Stadium on Sunday after about 20 members of the San Francisco 49ers knelt during the anthem. The 49ers were in town to play the Indianapolis Colts.

Pence was in town to upstage Peyton Manning.

What, you think he didn’t know the 49ers would kneel on Sunday? Pence knew. The 49ers are the one franchise, the only franchise, that have had at least one player kneel before every game since Colin Kaepernick was the first to do it in the 2016 preseason. Kaepernick played for the 49ers, of course. Last week, following Trump’s unpatriotic assertion that he would fire someone for exercising their First Amendment rights, more than half the San Francisco roster knelt.

That's a heckuva media manipulation operation that you have there, Mr. Vice President. If the local commentators in Indiana can see through you and your cheap stunts, then it stands to reason that the rest of the country sees through you as well.

Declaring war on the NFL is another unforced error for a regime that can't help but shoot itself in the foot every time it turns around. You don't go to war with a multi-billion dollar professional sport that generates massive wealth and wields the kind of economic power that the NFL does. Granted, many of the NFL team owners are going to continue to support Republicans at all levels--there's no way they're suddenly going to bundle several hundred million dollars and throw it at the Democrats in order to win back the House and Senate. But each and every player is, for all intents and purposes, a millionaire who knows where he came from. I have to believe that the players are going to start supporting Democrats for the 2018 race.

If they don't, then they deserve the likes of Pence making a mockery of free speech and dissent.