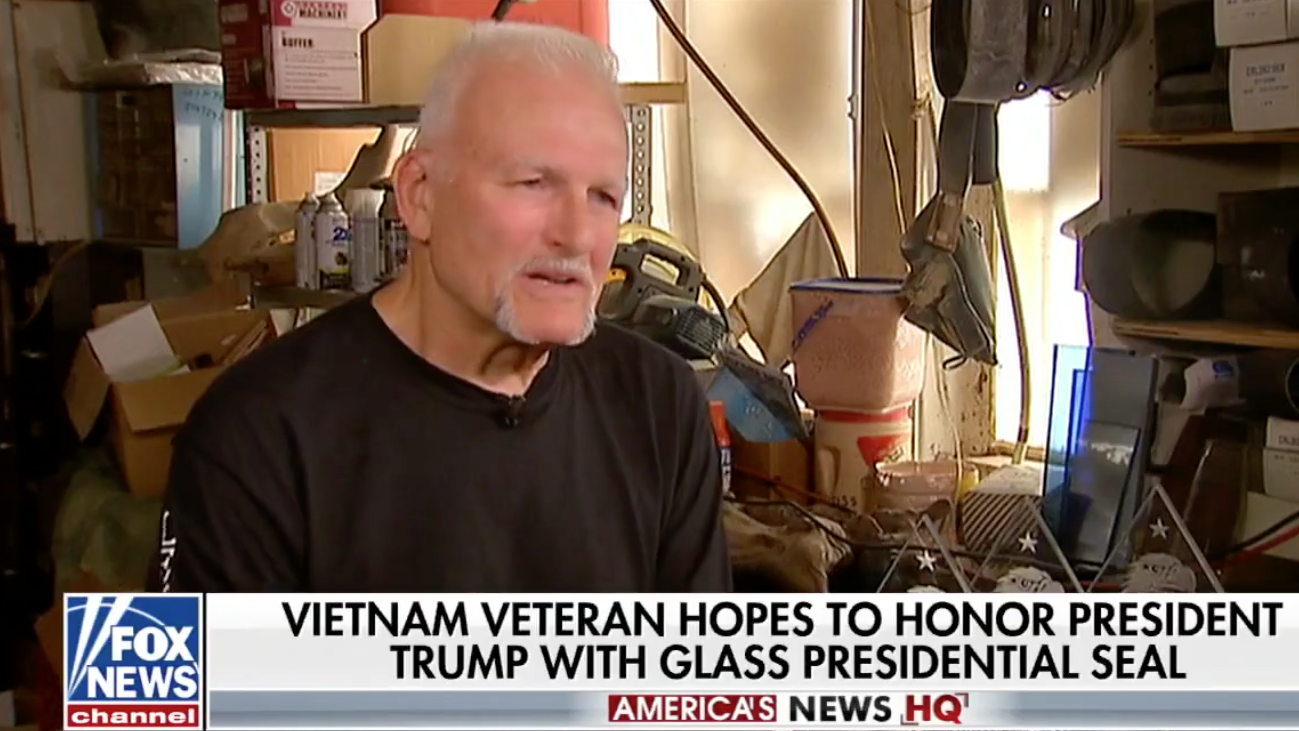 This asshole's name is John Garofalo and he fits right in with Trump and his circle of phony patriots:

A military veteran glowingly featured by Fox News earlier this month for his pro-Trump artwork and his record as a “war hero” admitted Thursday to lying about his military service. John Garofalo, 72, was featured in a Bryan Llenas report as having served seven years as a Navy SEAL, receiving 22 commendations, including two Purple Hearts, and having been listed twice as missing in action during Vietnam. Garofalo, who personally carved a presidential seal to gift President Trump, is a “tough, tough man,” Llenas said, after calling him a “hero” during an interview. Fox News anchor Eric Shawn later remarked: “God bless John Garofalo. We certainly hope maybe the president is listening.” However, when the Navy Times reached out to Garofalo on Thursday, he confessed to having lied about his military service. “What I did I’m ashamed of, and I didn’t mean to cause so much disgrace to the SEALs,” he told the Times. Fox News has since removed the video, which went viral on Facebook, and issued a statement apologizing for the error.

The shitty non-standards of Fox News are always easy to spot. Is there an old white guy at the door who wants to hate Obama and love whatever Republicans are loving right now? Get him on the air! There are no journalistic practices or standards. You can say whatever you want, and if it matches what Fox wants on the air, it goes on the air. It's as simple as that.

Unfortunately, all of Garofalo's claims turned out to be untrue. The fact is that he did not serve in Vietnam. He was never a U.S. Navy SEAL. Even though he showed us medals, Garofalo was not awarded two Purple Hearts or any of the other nearly two dozen commendations he claimed to have received, except for the National Defense Service Medal.

They give you the NDSM for showing up, basically.

The NDSM ranks eleventh out of twenty-nine in the order of precedence of service medals. There is no time requirement for the medal's issuance, meaning that someone who joins the military for simply a few days, and then receives an entry level discharge, would technically be entitled to the NDSM; in practice, however, military clerks will not add the NDSM on a DD Form 214 if the service member performed duty for less than 90 days from the completion of their initial entry training. This accounts for the medal's omission from a large number of "uncharacterized" and "entry level" separation documents. Veterans who have this medal so omitted may apply to the military service departments to have the NDSM added to records via a DD Form 215.

Fuck this guy for stealing valor. Nobody like him is ever a "cook" or a "mechanic" or a "clerk." They're always SEAL-Special Forces-Ranger-Pararescue qualified with fifty medals and a Top Secret Squirrel Congressional Medal of Double Honor.