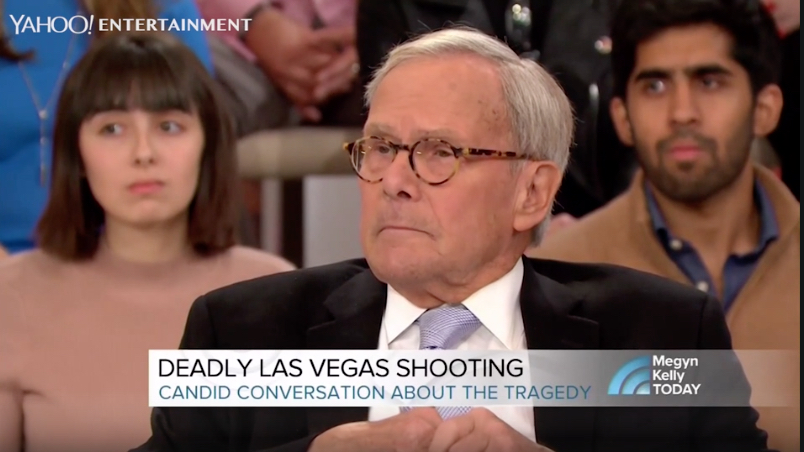 Tom Brokaw looks like someone took away his muffin:

Even though the audience was aghast, and even though Brokaw couldn't believe he was being interrupted, I can assure you--Megyn Kelly had a producer in her ear, screaming at her to cut off Brokaw and maintain NBC's corporate solidarity with the manufacturers of death and destruction.

I've watched this video, and it is terrible TV. You let the person speak when they have the floor, and you cut them off only if absolutely necessary.

A "hard break" at the NBC is when the automation at the 235 NBC affiliates and O and O stations will trigger -- based on a clock. It is impossible to stop. She was being polite. I hate Megyn Kelly and wish her to flop as badly as the next guy down the Daily Kos list. But the biggest difference between us and the hard right noise machine is that WE BASE OUR ARGUMENTS ON FACTS. Your post is not based on fact.

I'll accept that, but I do want to add--there's a BETTER way of stopping the discussion and this was awkward television.

But it is true that if you criticize the NRA in public, you invite an army of flying monkeys into your house, screaming and doxxing and SWAT-ing you at all hours of the day and night. Brokaw doesn't care, of course. He correctly identifies the Western American obsession with guns and how it led to a situation where someone with cash and time on his hands could amass a huge pile of weapons and use them on innocent people for his own reasons.

It is shocking that we don't have a motive at this point. It is not shocking that NBC would wheel out Kelly and have her silence a real newsman and broadcaster like Brokaw for leaving the reservation, as it were, and talking about the NRA in anything other than neutral or glowing terms.

There is no "free speech" in America. There's what the corporate people permit you to read and see, and then there are idiots like me who own a URL and a basic web page. Ideas travel through our public sphere because they receive a certain amount of acclimation or generate responses that are filtered through what you're allowed to see in front of you. Truly radical ideas are left hanging. The very best thoughts and ideas are the ones that filter into the public consciousness in spite of what you see in the media. The idea that seizing every single assault rifle in America would be proposed and discussed and then made a reality is one that no media company would ever get behind and promote. Would America be safer? It would be safer instantly, except, of course, for all of the people who would be shot while refusing to surrender their guns. Oh, Heavens. The only people who are allowed to get shot are the innocent, the pubescent, the unarmed, and the surprised. You're not allowed to shoot white people clinging to their rifles.

Count it up for yourself. Count the number of viable anti-gun people you see on television in the days and weeks ahead. You'll see a handful of regulars, but they've already been dealt with. Having Michael Moore talk about guns just means a handful of people will get their jollies making fat jokes on Twitter. Put on a real, credible anti-gun advocate and all you're doing is inviting trouble for those poor corporate fat-cats who like to holler in Megyn's earpiece.

Anyway, Megyn Kelly is the debacle that NBC deserves. They went from class to trash as fast as could be, and there's no indication anyone is going to admit they made a mistake.